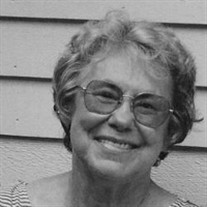 GERMAINE MANNING STAUNTON, VA Germaine "Peggy" Manning, 91, passed away June 24, 2013, at Staunton after a period of failing health. She was born April 8, 1922, in Nashua, a daughter of Evremond and Clorinthe (LaFrance) Delude. She was a resident of Nashua for over 80 years before retiring to Virginia to live with her daughter, Joyce, and son-in-law, Peter Bergeron. Peggy attended Nashua schools. She was employed at Doehla's, Edgecomb, NimCor and Fleet Bank, and also was a member of the Nashua Police Dept. for many years. She married her husband, Charles H. Manning in 1944. They enjoyed 53 wonderful years together until he succumbed to cancer in 1997. Peggy loved music, dancing, and reading, but she was most happy when surrounded by a living room full of family and friends, all in rocking chairs, all talking and laughing at the same time. She was preceded in death by her parents, by her brothers, Armand and Arthur, and by her sister, Juliette (Dugas). Survivors include her daughter, Joyce, and son-in-law, Peter Bergeron, of Verona; her son, Michael, and his wife, Doris (Laflotte) of Hooksett, NH; her grandson, Christopher Bergeron and his wife, Hollie (Compos), of Waynesboro; and their two children, Meagan and Madilyn. She is also survived by her brothers, Robert (Jack) Delude, of Tamworth, NH, and George (Hank) Delude, and his wife, Ginny, of Hudson, NH, and by her sisters, Theresa Galipeau and Irene Brouillard and her husband, Robert (Chick), and by her sister-in-law, Florence Delude, all of Nashua, NH; and also by several nieces, nephews, and cousins. A celebration of her life will be held July 13th, from 2 to 5 p.m. at her daughter's home, 73 Mountain View Drive, Verona. Henry Funeral Home is handling the arrangements. As an expression of sympathy, memorial contributions may be made to the charity of your choice. Condolences may be sent to the family at www.henryfuneralhome.net "The greatest thing you'll ever learn is just to love and be loved in return."

GERMAINE MANNING STAUNTON, VA Germaine "Peggy" Manning, 91, passed away June 24, 2013, at Staunton after a period of failing health. She was born April 8, 1922, in Nashua, a daughter of Evremond and Clorinthe (LaFrance) Delude. She was a resident... View Obituary & Service Information

The family of GERMAINE EMMA MANNING created this Life Tributes page to make it easy to share your memories.

Send flowers to the MANNING family.