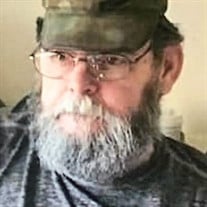 Gary Wayne Dudley, 72, widower of Patricia (Craun) Dudley, of Greenville, died Saturday, December 5, 2020, at the University of Virginia Medical Center, Charlottesville. He was born December 29, 1947, in Waynesboro, a son of the late William Arthur and Viola (Clark) Dudley. Prior to retirement, he was employed as a concrete finisher with 25 years of service. He was a founding member of Heaven’s Golden Gate’s Church. He loved doing crafts, working on old trucks, and loved his German Shepherd, Dale. In addition to his wife, he was preceded in death by a sister, Gloria Jean McCray. Family members include a son and daughter-in-law, Patrick W. and Krista Dudley of Greenville; four step-children, William and Chip Furry, Sandy Williams, and Tammy Huffman; two sisters and a brother-in-law, Kathy Arehart (Ricky Whetzel) of Greenville and Dee and Stephen Taylor of Waynesboro; a brother-in-law, Roger McCray; and two grandchildren, Sarah and Rebekah Dudley of Greenville. A graveside service will be conducted at 10 a.m. Tuesday, December 8, 2020, in Augusta Memorial Park by Pastor Golden C. Clark, Jr. The family will receive friends from 6 until 8 p.m. Monday, December 7, 2020, in Heaven’s Golden Gate’s Church, 810 Grubert Ave., Staunton. Memorials may be made to Heaven’s Golden Gate’s Church, P.O. Box 228, Verona, VA 24482. Henry Funeral Home is handling the arrangements. Condolences may be sent to the family at www.henryfuneralhome.net.

The family of GARY WAYNE DUDLEY created this Life Tributes page to make it easy to share your memories.

Send flowers to the DUDLEY family.