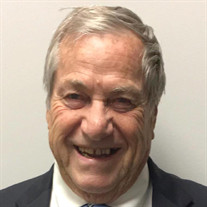 Gerald “Gerry” Kerr Wells, Sr., PhD, 87, beloved father, grandfather, and great grandfather, passed away on the 17th of September 2021 at Augusta Health. Gerry was born in Richmond, VA in 1934 to the late Drexel Dewey Wells, Sr. and Earnestine Ure Wells. Prior to his death, he owned Wells and Associates with his daughter, Asheley Wells serving as Vocational Experts for Social Security Administration. He served in the United States Army from the 20th of September 1954 to the 30th of September 1956. He also served in the Reserves with an Honorable Discharge on the 29th of September 1962. Dr. Wells received a Bachelor of Science in Business Administration from the University of Richmond on the 6th of June 1960. He received a Master of Arts from the University of Richmond on the 27th of August 1964. He received a Doctor of Philosophy from the University of South Carolina on the 13th of May 1972. He co-wrote several books on Vocational Rehabilitation. Gerry was also co-owner of Shenandoah Interiors LTD in Staunton with Carolyn Wells from 1982 to 1995. He had written several articles in the magazine, Furniture of Today. He loved and enjoyed his music and was in a band, “Your Rooms Right Here”, as lead guitar and vocal. He also enjoyed racquetball and golf. He was an active member at Christ Evangelical Lutheran Church, Staunton. In addition to his parents, he is preceded in death by two brothers, Drexel Dewey Wells, Jr. and Malcolm Lee Wells. Gerry is survived by a son, Gerald K. Wells, Jr. and wife Lisa R. Wells; a daughter, Asheley D. Wells; a granddaughter, Jackie W. Griffin and husband Tad of CA; a grandson, Hunter S. Wells; a great grandson, Axel B. Griffin of CA; his companion, Judy Rowe and her two daughters, Jennifer Poats and husband Danny and their two sons, and Karen Dorrell and husband Tim of Nebo, NC; three step grandchildren; and four step great grandchildren. A private service will be held at a later date. The family would like to thank all the nurses and doctors in the ICU unit for all they did during his stay at the hospital.

The family of Gerald K. Wells Sr. created this Life Tributes page to make it easy to share your memories.

Send flowers to the Wells family.