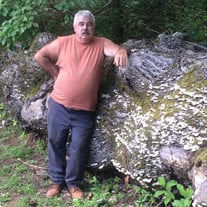 Glenn “Butch” Wayne Britt, 69, husband of Elizabeth “Libby” (Kisamore) Britt went to be with his Lord and Savior, Saturday, September 18, 2021 at Augusta Health. Butch was born on January 10, 1952, in Augusta County to the late Dorothy Britt Clifton and was raised by his grandmother, Lillie Mae Burford Britt. Butch was employed at Kisamore Lumber for 29 years, as well as Lovegrove Construction and Britt Boys Logging. He was a member of Hiner Church of the Brethren in McDowell. On August 23, 1980, Butch married the love of his life, Elizabeth “Libby” Kisamore. Butch was a loving father to Doug and Cara Britt and Drew and Tiffany Britt. He was a proud and loving Pawpaw, called “Brother” by Wyatt and Walker and “Pawpaw” by Lillie Britt. He enjoyed bear and deer hunting with his boys and grandchildren. In addition to his immediate family, he is also survived by his father and mother-in-law, Ray and Virginia Kisamore; sisters-in-law and brothers-in-law, Gary and Maryann, Steve and Pam Kisamore, Hiram and Sandra Tackett; stepfather, Hays Clifton; aunt, Shirley Britt; sisters and brothers, Velma and Fred Griffin, Sue and Shane Waybright, Scott Clifton and Kent and Stephanie Clifton; numerous nieces and nephews, including special nieces, Heather Marshall, Shelby Kisamore and Olivia Tackett. He is preceded in death by his aunts and uncles, Carl and Elaine Britt, Joseph Britt, William and Janet Snyder and Richard and Nancy Britt. Butch was a loving Husband, Father, Father-in-law, Pawpaw, Uncle and Friend. A Funeral Service will be conducted at 11:00 a.m. on Wednesday, September 22, 2021 in Henry Funeral Home Chapel by Pastor Jeff Fike of Hiner Church of the Brethren. Burial will follow in Green Hill Cemetery, Churchville. Family will receive friends on Tuesday, September 21, 2021 from 6 – 8 p.m. at Henry Funeral Home. Pallbearers will be Bill Bowman, Wes Staton, Jim Wilson, Toni Riley, Gary and Steve Kisamore and Hiram Tackett. Honorary pallbearers will be Marvin Gulley, Ricky Buchanan, Teri Riley, Raymond and Carol Desper, Gary North, Ronnie Ralston, Kathy Wilson and Denny Argenbright. The family would like to thank Mt. Solon and Churchville Fire and Rescue Departments for the care they provided and the wonderful staff at Augusta Health Emergency Room and Intensive Care Unit and especially, Shelly Payne. At the family’s request and out of respect for the safety of all we kindly request that face coverings be worn. In lieu of flowers, memorial donations may be made to Mt. Solon Fire and Rescue, 86 Emanuel, Mt Solon, VA 22843 or Churchville Fire and Rescue, 3829 Churchville Ave, Churchville, VA 24421. Condolences may be sent to the family online at www.henryfuneralhome.net.

The family of Glenn "Butch" W. Britt created this Life Tributes page to make it easy to share your memories.

Send flowers to the Britt family.