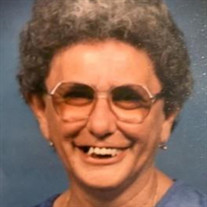 Glenna Helmick, sweet mother of William Wiseman and daughter-in-law, Debbie, of Harrisonburg VA and Robert Wiseman and daughter-in-law, Joanna, of Greensboro, NC has ascended to heaven on Friday, April 24, 2020, in Harrisonburg. Glenna was born on September 1,1947 in Swoope, Va. Before Glenna’s last happy days residing at Accordius Nursing Home in Harrisonburg VA, she had previously lived beside her closest sister, Sally Robertson, of Staunton, VA. Glenna loved her kitty cat, Johnny, who was her little feline friend before she had to go into the nursing home. Glenna also loved to spend time with her longtime companion, William Drumheller, who lived in the same apartment complex as her. Glenna also loved to do her crafts while she was enjoying her time to herself. Glenna is also survived by her other sisters, Myrlin Chilafoux of Grottoes VA and Nancy Lam and her husband, Carl, of Grottoes ,VA.; Angela Hunter, her niece, who was like a sister, of Denver NC.; her brothers, Glenwood (Sonny) Cain and his wife, Kay, of Mt Sidney, VA and Donnie Cain and his wife, Angie, of West Virginia. Glenna was preceded in death by her mother, May, her father, Glenwood Cain, and also her brother, Roger Cain. Henry Funeral Home is handling the arrangements.

The family of Glenna Helmick created this Life Tributes page to make it easy to share your memories.

Send flowers to the Helmick family.