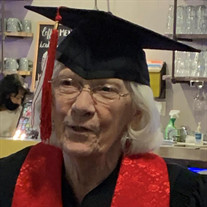 Grace Ellen (Banks) Morris, 79, widow of Charles Thomas Morris, of Staunton, died Tuesday, January 19, 2021, at Brightview at Baldwin Park. She was born November 23, 1941, in Clay County, West Virginia, a daughter of the late Theodore and Margaret (Sheets) Banks. Prior to retirement, she was employed by Dr. Faulkenberry medical practice as a receptionist. She was a founding charter member of the Verona Women of the Moose. In addition to her husband, she was also preceded in death by a brother, Ray Hanna and a sister, Linda Mitts. Family members include two sons, Thomas Edward Jones and William Rondell Jones; and two daughters, Patricia Lindley and Margaret Hansbury Puckett; a special grandson who she raised, Delray Jones; a special nephew and niece, Kevin and Tammy Hanna; five grandchildren; and special caregivers, Rodger and Juice Huffman. A funeral service will be conducted at 11:00 a.m. on Friday, January 22, 2021 in the Henry Funeral Home Chapel by the Rev. Sylvia McDorman. Burial will follow in Oak Lawn Mausoleum and Memory Gardens. Active pallbearers will be Rodger Huffman, Kevin Hanna, Delray Jones, Allan Davenport, Rick Bunting, Stan Carter, Jim Flower, and Jerry Wimer. The family will receive friends one hour prior to the service in the funeral home.

The family of Grace B. Morris created this Life Tributes page to make it easy to share your memories.

Send flowers to the Morris family.