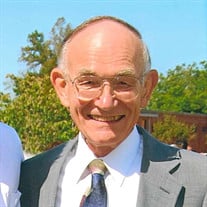 Dr. H. Lynn Moore, Jr., 89, husband of Eloise (Ma) Moore, passed away on April 22, 2022 at his home. He was known as “Honey” to family and friends. Dr. Moore was born on Palm Sunday, April 9, 1933 in Blacksburg, Virginia to the late Harry L. Moore, Sr. and Frances Garber Moore. He was a Deacon, Elder and Trustee of Bethel Presbyterian Church. Honey was in the 4-H All Star Hall of Fame, ran track at his alma mater, Virginia Polytechnic Institute and State University, and a member of the Highty-Tighties. After graduating from the Medical College of Virginia, he practiced medicine for 60 years and was the team doctor for Riverheads athletics since the school’s inception in 1962. He was one of the founders of the Augusta County Quarterback Club and is in the Riverheads Athletic Hall of Fame. He received numerous awards and recognitions which he humbly accepted. Dr. Moore is most well-known for his faith, his many charitable acts, and as a loving husband and father. He lived his life to serve others. Honey is survived by his children, Douglas Moore (Myran) of Wyoming, Kay Agee (Warren) of Keysville, VA, Sally Williams (Joe) of Greenville, Dinah Johnston-White (Randy) of Oklahoma, and Joe Moore (Tabby) of Staunton. He is also survived by two brothers, Charles William Moore and John Garber Moore, eight grandchildren, and ten great-grandchildren. In addition to his parents and his wife of sixty-five years, he is preceded in death by a brother, James Richard Moore. A graveside service will be private. A memorial service will be conducted by Reverend Kelly-Ann Rayle at Riverheads Football Field on Saturday, April 30, 2022 at 3:30 pm. Lawn chairs are welcome. Memorial donations may be made to the Alzheimer’s Association at 355 Rio Road W Ste. 102, Charlottesville, VA 22901, the American Cancer Society at 4405 Cox Road Ste. 110, Glen Allen, VA 23060, and the Riverheads Boosters Club, (RABC) at PO Box 73, Mint Spring, VA 24463.

The family of Dr. H. Lynn Moore Jr. created this Life Tributes page to make it easy to share your memories.

Send flowers to the Moore family.