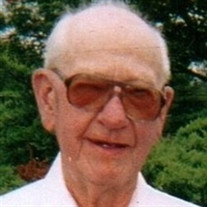 HAROLD B. MARSHALL STAUNTON, VA Harold Bronson Marshall, 98, husband of Frances Smiley Marshall, of 264 Balsley Road, passed away peacefully Sunday, July 14, 2013, at his residence. He was born April 13, 1915, in Laurel Fork, VA, a son of the late Woodson Emmanuel and Zera Erna (Montgomery) Marshall. He was a star basketball player at Goshen High School where he graduated in 1935. He was a World War II veteran, serving with the Texas-Oklahoma division in the 358th Infantry. He went in on the second wave of the D-Day assault, June 7, 1944 at Utah Beach. On June 19th he was wounded in battle, which resulted in amputation of his left hand. For this he received a Purple Heart. He retired from Dupont's Benger Lab with 40 years of service. He was a member of Fishersville Baptist Church. He married Frances Smiley on September 24, 1958, who survives. Also surviving are a daughter, Rita Lynn Marshall Shaver and her husband, Kevin, of Verona; a son, Daniel Alan and wife, Sharon Marshall, of Fishersville two sisters, Mavis Harris of Norfolk and Violet Carter of Ayden, North Carolina; four grandchildren, Kyle Shaver, Aaron Shaver, Ian Marshall, and Ira Marshall; numerous special nieces and nephews; and a special caretaker, Shirley Hagerman. He was preceded in death by five brothers, Homer, Frank, Vernon, Cecil and Claire and two sisters, Irene and Grace. A memorial service will be conducted at 11 a.m. Wednesday, July 17, 2013, in Fishersville Baptist Church by the Revs. Steve Parker and John Hamric. Burial will be private. Military rites will be performed by Augusta-Staunton VFW Post #2216. The family will receive friends Tuesday, July 16, 2013, from 6 until 8 p.m. at the residence, 264 Balsley Road, Staunton, VA. Friends may also call at the funeral home and residence at any time. In lieu of flowers, memorials may be made to Blue Ridge Area Food Bank, Inc., P.O. Box 937, Verona, VA 24482. Henry Funeral Home is handling the arrangements.

HAROLD B. MARSHALL STAUNTON, VA Harold Bronson Marshall, 98, husband of Frances Smiley Marshall, of 264 Balsley Road, passed away peacefully Sunday, July 14, 2013, at his residence. He was born April 13, 1915, in Laurel Fork, VA, a son of the... View Obituary & Service Information

The family of HAROLD BRONSON MARSHALL created this Life Tributes page to make it easy to share your memories.

Send flowers to the MARSHALL family.