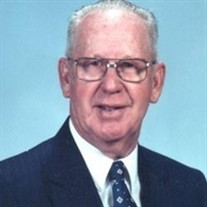 HENRY M. EAGLE STAUNTON, VA Henry Merle Eagle, 93, husband Grace (Hiner) Eagle, died Wednesday, August 22, 2012, at his residence. He was born September 1, 1918, in Highland County, a son of the late Harrison Morton and Nellie C. (Gutshall) Eagle. Mr. Eagle was a veteran of the U.S. Army having served during World War II. Prior to retirement, he was employed by Westinghouse. He was a member of Third Presbyterian Church. He was a member of the Bob Frakes Chapter of Ex-Prisoners of War. In addition to his wife, whom he married on July 2, 1949, family members include a son, Edwin Eagle of Staunton; two sisters, Rita Chapin and Violet Simmons; three grandchildren, Dennis Eagle, Jr., Anne Liskey, and Carrie Thomas; and three great grandchildren, Paige Eagle, Arianna Hoover, and Austin Eagle. He was preceded in death by a son, Dennis Eagle; two brothers, Harrison Eagle, Jr., and Jarrett Eagle; a half-brother, Fleet Gutshall; and two sisters, Villa Gutshall Rexrode and Mary Conner. A graveside service will be held at 10 a.m. Saturday, August 25, 2012, in Augusta Memorial Park with military rites by the Staunton VFW Post 2216 followed by a funeral service at 11 a.m. in Third Presbyterian Church by the Rev. Joseph Brandon The family will receive friends from 6:30 until 8 p.m. Friday, August 24, 2012, in the Henry Funeral Home. Memorials may be made to the Staunton Augusta Rescue Squad, 1601 North Coalter Street, Staunton, VA 24401 or to a Charity of One's Choice.

The family of HENRY MERLE EAGLE created this Life Tributes page to make it easy to share your memories.

Send flowers to the EAGLE family.