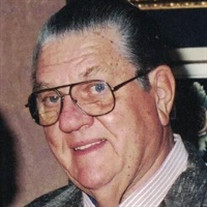 Herbert Hoover Walge, beloved husband, father, grandfather and great grandfather passed away peacefully on Saturday August 10, 2019. He was born on February 21, 1929 to Estonian immigrants Adele Pold and John Walge in Philadelphia, the fourth of five children.  He was the first in his family to graduate from college, graduating from the University of Pennsylvania in 1951.  It was in college that he met the love of his life, Lillian Graf, whom he was married to for 68 years.  Together with his children, they moved to Staunton when he purchased Southern Electric Corporation in 1971.  It was the fulfillment of a lifelong dream to own his own business. He was a member of Christ Evangelical Lutheran Church where he served as Assistant Treasurer, church council and on several committees. Herb was a gregarious fellow who always looked for a way to make people laugh.  An excellent card player, he delighted in infuriating his fellow card players, when he beat them at gin rummy.   He was the first person on the dance floor at every wedding.  His unique shopping purchases were legendary.  Standing 6’4, he was a strong, commanding presence with a gentle heart and caring nature.  These characteristics became more pronounced as he grew older.  Being a romantic at heart, He continued to refer to his wife of 68 years as his bride, and cared for her through several falls as they aged together, still caressing her hand and romancing her with song two weeks before his final farewell. Herbert is survived by his adoring wife Lillian, his four children: Nick Walge, Susan Erskine, Sharon Parrague and Sandy Sockett.  His 11 Grandchildren are Jason Rivenberg, Amy Walge, Nicholas Walge Jr.,  Adam Erskine, Alex Erskine, Mac Erskine, Abby Erskine,  Nancy Barclay,  Lizzy Mello, Max Parrague  and Sam Parrague. He has 5 great grandchildren. A memorial service will be held at Christ Evangelical Lutheran Church, 2807 N. Augusta Street, Staunton, VA on August 26, 2019 at 10am. In lieu of flowers, donations can be made to Hospice of the Shenandoah or Christ Evangelical Lutheran Church Memorial Fund. Condolences can be made to the family at Henry Funeral Home.

The family of HERBERT HOOVER WALGE created this Life Tributes page to make it easy to share your memories.

Send flowers to the WALGE family.