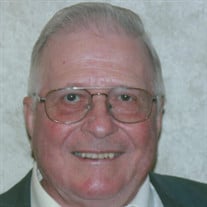 Hampton Walker Foley, 82, husband of Mabel M. Foley of Mt. Sidney, died Tuesday, October 27, 2020 at his residence. Mr. Foley was born on December 17, 1937 in Augusta County to the late H. Clestine and Mary Madeline (Via) Foley. He was a proud alumnus of Augusta Military Academy. He was involved in the Roller Rifles and participated in many reunions. Two of his favorite things were pitching softball and bailing hay. Hampton served in the U.S. Navy and was a member of Salem Evangelical Lutheran Church where he served in numerous positions including lay minister. He was in industrial construction as a master electrician for many years, helping build many local high schools and businesses in the area. For almost 20 years, he was employed as a master electrician for Hershey Chocolate. In addition to his wife, he is survived by his children, Mary Reeves and husband Ernie of Bridgewater, Lisa Letchworth and husband Kit of Lanexa, Hampton Walker Foley II and wife Gail of Mt. Sidney, and Christopher Alan Foley and wife Kati of Mt. Sidney; siblings, Lea Grubb of Verona, Ronnie Foley of Weyers Cave, Arnesa Lind and husband Carl of Mt. Sidney, and Patty Quillen and husband Stan of Waynesboro; his grandchildren, Adam Owens and wife Kelley, Allison Ullrich and husband Albert, Anna Foley, Jared Wagner, and Colby Foley; and his great grandchildren who were his joy in his final days, Eliza, Adah and Judah Owens, and Albert Paul Ullrich III. In addition to his parents, he is preceded in death by his brothers, Kevin, David, Buck, and Larry Foley. The family will receive friends Saturday, October 31, 2020 from 2:00 p.m. until 4:00 p.m. at Henry Funeral Home. A graveside service will be held at 2:00 p.m., Sunday, November 1, 2020 at Salem Evangelical Lutheran Church Cemetery by Pastor Derek Boggs. Memorial donations may be made to the Salem Evangelical Lutheran Church Imagine Center, P. O. Box 38, Mt. Sidney, VA, 24467 or a charity of your choice. Arrangements have been entrusted to Henry Funeral Home. Condolences may be sent to the family online at www.henryfuneralhome.net.

Hampton Walker Foley, 82, husband of Mabel M. Foley of Mt. Sidney, died Tuesday, October 27, 2020 at his residence. Mr. Foley was born on December 17, 1937 in Augusta County to the late H. Clestine and Mary Madeline (Via) Foley. He was a proud... View Obituary & Service Information

The family of Hampton W. Foley created this Life Tributes page to make it easy to share your memories.

Send flowers to the Foley family.