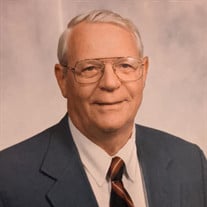 Harrison May, 81, husband of Patricia (Ferguson) May, passed away on September 15,2021 at Augusta Health. He was born on July 19, 1940, to the late James Harrison and Eugenia (Sproul) May. Judge May was born and raised in Staunton, Virginia and attended Staunton City Public Schools. He attended the Staunton Military Academy from 1953-1957, Davidson College from 1957-1961 and the University of Virginia Law School from 1961-1965. He was employed from 1965-1967 at Hazlegrove, Carr, Dickinson, Smith and Rea in Roanoke, VA.; from 1967-1969 at Cochran, Lotz, and Black in Staunton, VA.; from 1970-1982 for the Commonwealth’s Attorney for Augusta County (part time private practice until 1980); and was elected Judge of the 25th District Juvenile and Domestic Relations Court until he retired in April of 2001. Judge May was a member of the Board of Governors Criminal Law Section, the Virginia State Bar (1976-1980) President, the Virginia Association of Commonwealth’s Attorneys (1976-1977) President, Augusta County Bar Association (1980-1981) Chairman; and the Criminal Justice Advisory Committee Shenandoah Planning District Commission. He joined the Virginia Army National Guard as a Private on December 2, 1962 and took basic and advanced infantry training at Fort Jackson, South Carolina. He graduated first in class from the Infantry Officer Candidate School in Fort Benning, Georgia in August of 1964. He was transferred to the Judge Advocate General’s Corps in 1975. He served as Staff Judge Advocate for the 116th Infantry Brigade and for the 29th Infantry Division. He last served as Staff Judge Advocate General, Headquarters, Virginia Army National Guard in Richmond, VA. He retired as Colonel and was awarded the Meritorious Service Medal. He served as President of the Virginia National Guard Association in 1979. Judge May was also a Vestry member, Senior Warden, and choir member at Emmanuel Episcopal Church in Staunton, a member of the Staunton Kiwanis Club, Beverley Manor Ruritan Club, Elks and Moose Clubs, 32nd degree Mason and Shriner, and the Institutional Review Committee, Western State Hospital Advisory Board, Salvation Army Board of Trustees, Woodrow Wilson Presidential Library Board of Trustees, Historic Staunton Foundation, and the Virginia School for the Deaf and Blind Foundation Board. He is survived by his wife, Patricia Ferguson May; his daughter, Anne Brooks with grandchildren Chloe Stott and Sadie Stott; his son, Jim May and wife Gay Gibson with grandchildren Grace May and Sophie May; his daughter, Sarah Bertoline and husband BJ Bertoline with grandchild Myla May Bertoline; his daughter Genie May; his sister, Eugenia May of Spring Green, Wisconsin; and a number of nieces and nephews. A graveside service for family and close friends will be held at Thornrose Cemetery at 2:00 p.m. on Monday, September 20, 2021. In keeping with the CDC Guidelines and out of respect for the safety of all we kindly request that masks be worn and practice safe social distancing. A celebration of his life will be determined at a later date. In lieu of flowers, memorial donations may be made to the Emmanuel Episcopal Church at 300 West Frederick St, Staunton, VA 24401

Harrison May, 81, husband of Patricia (Ferguson) May, passed away on September 15,2021 at Augusta Health. He was born on July 19, 1940, to the late James Harrison and Eugenia (Sproul) May. Judge May was born and raised in Staunton, Virginia... View Obituary & Service Information

The family of Harrison May created this Life Tributes page to make it easy to share your memories.

Harrison May, 81, husband of Patricia (Ferguson) May, passed...

Send flowers to the May family.