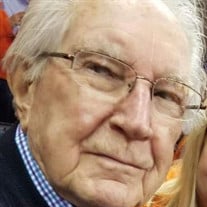 Harry “Paul” Obaugh, 94, husband of Betty Jo (Kline) Obaugh, died Sunday, August 15, 2021 at his residence. He was born on October 12, 1926, to the late Clarence B. and Minnie (Eye) Obaugh in Augusta County, Virginia. Paul grew up just west of Staunton on the family farm. At age 10, he would drive the horse-drawn wagon into town with produce and such, to barter and trade, or to pick up supplies down at The Wharf. Being a product of The Great Depression, Paul never took anything for granted, nor anyone, and valued every penny he earned. His work ethic and tireless desire to achieve positive results culminated in one of the most successful new and used-car dealerships in the Shenandoah Valley (and beyond), for over 56 years, and he was still selling cars one month ago to his caregivers. His kindness was endearing, and his benevolence quiet, yet profound. He served in the U.S. Navy during the Korean War, and when he returned, drove a delivery truck for White Way Laundry, where he gained a vast knowledge of Staunton's street names, locations, and met many life-long acquaintances. He then went into the car business, working for a few businesses, then opening Augusta Motors with Mr. Mac McChesney; first on Central Ave., then moving to Greenville Ave. near Wright's Dairy-Rite. Beginning in 1953, he went to work at Barkhouser Motors, and persisted in asking to purchase the Ford Dealership until Mr. Barkhouser finally relented. Paul, with his nephew, Charlie, purchased the business in June of 1965, and they built the current location in 1966, which has since seen six renovations due to to growth. During these years, Paul took night classes, and graduated from Dunsmore Business College and Bridgewater College. He was a life-long member of Central United Methodist Church, and a long-time member of the Staunton Kiwanis Club; he loved Staunton, and the surrounding communities. He supported and frequented local businesses, and was instrumental in getting the ornament decorations placed along Greenville Ave. during the Christmas season. Paul never met a stranger, but if he had, he would have asked them if they needed a new vehicle, just like everyone he ran into - the man was the consummate salesman. You were the best husband, father, and boss, Paul Obaugh, and you never judged anyone. You will be sorely missed by all. Paul was very proud to be a Ford dealer. He, and the family would like to express their sincere gratitude to Ford Motor Co. for allowing them to represent Ford in Augusta and Highland County these 56 years. The family would like to extend our sincere thanks to Paul's caregivers and Augusta Health Hospice of the Shenandoah for the excellent care they gave our husband and dad. Surviving family members include a son, Gregory P. Obaugh; two daughters, Tammy S. Obaugh and Michelle O. Puffenbarger (Steve); a sister, Vallie Daughtery; grandchildren, S. Hunter Puffenbarger, Raegan M. Puffenbarger, K. Trinity Obaugh and Addison V. Obaugh; a sister-in-law, Carolyn Obaugh; a number of nieces and nephews; and his beloved Pekingese, Lucy. In addition to his parents, he is preceded in death by three brothers, Walter, C. Ray, and Henry Obaugh; and a sister, Mabel McAllister. The family will receive friends from 5 until 8 p.m., Thursday, August 19, 2021 at Henry Funeral Home. A memorial service will be conducted at 1:00 p.m., Friday, August 20, 2021 at Central United Methodist Church. Burial will be private in Thornrose Cemetery. Memorial donations may be made to Central United Methodist Church, 14 North Lewis Street, Staunton, VA, 24401 or a local charity of one’s choice.

The family of Harry Paul Obaugh created this Life Tributes page to make it easy to share your memories.

Send flowers to the Obaugh family.