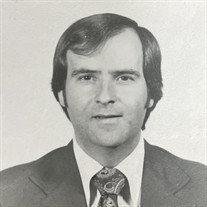 Herman Henry Pullin, Jr., 75, husband of Betty Sue (Thompson) Pullin of Churchville, passed away on Saturday May 22, 2021 at the Shenandoah Hospice House. He was born in McDowell, Va on September 28, 1945, a son to the late Herman Henry Pullin and Ruth Etta (Phillips) Pullin. He was a member of St. Peters Lutheran Church in Churchville. Herman lived a very productive and active life. He served in the United States Navy and Navy Reserves. He started in the grocery business in 1964 at Reids Store in Staunton then later worked for Jiffee Mart as the Store Manager. In 1968 he started his career with Home Beneficial Life Insurance Company where he worked for 22 years. He was very active in his community as well, he was a honorary member of the Staunton-Augusta Rescue Squad, a member of the Churchville Ruritan Club, where he served as Past President and Zone Governor, he was also a member and past president of the Rockingham Association of Life Underwriters. In 1990 Herman was severely injured in an auto accident and has been taken care of by his wife since 1995. He would attend the Daily Living Center in Waynesboro which was a blessing to him during this time. The family would like to express immense gratitude to the numerous Doctors, Nurses and individuals who helped Herman over the years, especially his caregivers, Bonnie Rankin and Brigitte Powell. The family would also like to thank Laura Summy and Kathy Anderson of Shenandoah Hospice for all of their care. In addition to his wife of 56 years, he is survived by a son, Chad Pullin and wife Sara (Eckstein) Pullin, of Churchville, Va; and a brother, David H. Pullin of Browns Summit, NC, and numerous nieces and nephews. He was preceded in death by his siblings, Hilda Hall Richardson, Geneva Coffey, Juanita Gray, Rebecca King, Wilma Carpenter and Carl Pullin. The family will receive friends on Wednesday May 26, 2021 from 5:30 p.m.-7:30 p.m. at Henry Funeral Home. A graveside service will be held at 10:00 a.m. on Thursday May 27, 2021 at Oak Lawn Mausoleum and Memory Gardens. In lieu of flowers, donations may be made to the Churchville Rescue Squad, P.O. Box 608, Churchville, Va 24421 or Hospice of the Shenandoah, c/o. Augusta Health Foundation, P.O. Box 1000 Fishersville, Va 22939. Condolences may be sent to the family at www.henryfuneralhome.net

Herman Henry Pullin, Jr., 75, husband of Betty Sue (Thompson) Pullin of Churchville, passed away on Saturday May 22, 2021 at the Shenandoah Hospice House. He was born in McDowell, Va on September 28, 1945, a son to the late Herman Henry Pullin... View Obituary & Service Information

The family of HERMAN HENRY PULLIN JR. created this Life Tributes page to make it easy to share your memories.

Send flowers to the PULLIN family.