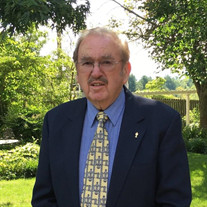 Horatio “Dee” Davenport Thompson IV, 82, of Waynesboro, VA passed away on October 5, 2021 in Fishersville, VA. He was born on April 19, 1939 in Lexington, VA to the late Horatio and Mildred (Goodman) Thompson III. Dee grew up on Timber Ridge Plantation in historic Rockbridge County. He loved his childhood friends, especially his brother and sister. They would go hiking, hunting, and exploring. He was a devout Christian, loving friend and humble man. Dee moved to Lynchburg, VA and worked at Wiley & Wilson before starting L’Avenir Quarter Horse Ranch. He married his beloved wife, Mary in 1979 and together they lived and worked on the ranch until they moved to Staunton, VA in 1983, and to Waynesboro, VA in 2000. Upon moving to Staunton, they bought Miller Metal Fabrications, which he owned and operated until his death. Dee was an active member of St. Francis Catholic Church, a devoted father and grandfather, and dedicated friend. He modeled his life after that of St. Joseph, offering kindness, advice, and love to everyone in his life. He loved to take his family on Sunday drives in the country and to the campgrounds in the mountains. In addition to his dearly loved wife of 42 years, Mary (Napotnik) Thompson, he is survived by his son, J. Daniel; two daughters, Anne Marie Ross and husband Aric, and Amy Thompson; three grandchildren, Annarose, Adrian, and Christian; sister-in-law Jacqueline Thompson; nephews Michael and Kevin; niece Melinda; and numerous children that held special places in his heart. In addition to his parents, Dee was preceded in death by his sister Ann Montgomery and her husband Alan; and his brother, Charles E. Thompson. The Mass of Christian burial will be held at St. Francis of Assisi Catholic Church, 118 N. New St., Staunton, VA at 10:00am on Saturday, October 9th by Reverend Tom Collins. The family will receive friends in the Parish Hall following the Mass. The burial will take place at 1:00pm at Riverview Cemetery in Waynesboro, VA. In lieu of flowers, memorial contributions may be made to St. Francis of Assisi Catholic Church in Staunton.

The family of Horatio "Dee" D. Thompson, IV created this Life Tributes page to make it easy to share your memories.

Send flowers to the Thompson, family.