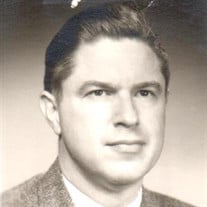 Dr. Howard McDonald Wilhelm age 92 Professor of Economics Emeritus at James Madison University died in Staunton, VA on Jan 2, 2021. Dr. Wilhelm was born Aug 12, 1928 in Goshen, Va. the son of Oma William Wilhelm and Blanch McDonald Wilhelm He graduated from Goshen High School in 1946 and attended Virginia Military Institute (Class of 1950B). He earned his bachelor’s degree from the University of Virginia, his masters from James Madison University, and his doctorate from the University of Virginia During the Korean War, he served as a fighter pilot with the 5th Air Force in Korea and later stationed at Clark Field in the Philippines with the 44th Fighter Bomber Squadron. His military decorations include the United Nations Medal and the Korean Medal. After completing his service with USAF Dr. Wilhelm continued his flying career with TWA. In 1961, Dr. Wilhelm joined the faculty at Madison College (later James Madison University) which led to a distinguished professional career covering 29 years. The last 13 of which he served as head of the Department of Economics. Among the recognition and honors received include being named a Southern Education Fellow at the University of Virginia, memberships in Omicron Delta Epsilon National Honor Society of Economics, Pi Gamma Mu National Social Service Honor Society, and Kappa Delta Pi National Educations Honor Society. Upon retirement from James Madison University, he was designated Professor of Economics Emeritus. Dr. Wilhelm’s service to this community included Chairmanship of the Staunton Republican Party, campaign chairman for delegate Pete A.R. Giesen, Jr for the Virginia House of Delegates, Economic Advisor to the campaign advisory staff of Caudwell Butler, Staunton campaign co-chairman for Governor John Dalton, and consultant in the economic education to public school systems in central Shenandoah Planning District. He was married to Jane Stiegel of Staunton in 1956 and shared 50 years of love for each other and pleasure in their family and friends. He is survived by his son Thomas and wife Tricia; four grandchildren Tamara Kay Larose, Erik Thomas Wilhelm, Nicholas Howard Wilhelm, and Kathryn Marie Wilhelm. One sister Shirley Wilhelm Rorer of Goshen, Va. Two nephews Joseph Rorer of Lexington and David Rorer and wife Cheryl and their children Rachel Samantha Rorer and Stuart Wilhelm Rorer all of Salem, Va. He is also survived by this dear close friend of many years Nancy Dahl of Staunton, Va. A funeral service will be conducted at 2pm on January 12, 2021 by the Pastor Robert D. McCarty at Thornrose Cemetery. We request that in lieu of flowers, donations in Howard’s memory may be made to Christ Lutheran Church Endowment Fund, 2807 N. Augusta St. Staunton, Va. 24401.

The family of Howard M. Wilhelm created this Life Tributes page to make it easy to share your memories.

Send flowers to the Wilhelm family.