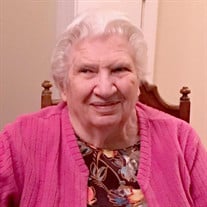 Isabelle Audrey (Rexrode) Fisher, 88, widow of John Franklin Fisher, of Stuarts Draft, VA passed away Sunday, October 3, 2021 at her residence. She was born in Hightown, VA on December 8, 1932 and was the daughter of the late Arthur and Grace Rexrode. She was raised on the family farm known to many as The Rexrode Sugar Camp in Highland County, VA. She graduated from Blue Grass High School. Prior to retirement, Mrs. Fisher was employed at Genesco and was also a sales clerk at numerous businesses in the area. She loved dogs and especially missed her two special dogs, Sugar and Charlie. She also enjoyed visiting with her grandchildren and great grandchildren. She is the last survivor of her immediate family. Family members include three daughters and sons-in-law, Evelyn and Barry Argenbright of Waynesboro, Nancy and Sam Argenbright of Mint Spring, and Susan and David Acord of West Augusta; a son, Raymond Fisher of Goshen; three granddaughters, Jill Grimm and husband, Shannon, Elizabeth Fisher, and Tina Hodge and husband, Jamie; four grandsons, Jonathan Fisher and girlfriend Arrica Biggs, Daniel Fisher and wife, Brandi, Eric Argenbright and wife, Amy, and Jason Argenbright and wife, Kerry; ten great grandchildren, Taylor and Ava Grimm, Allison Hodge, Kendyl, Kale, Jake and Maile Argenbright, Westyn and Josie Mae Fisher and one to be born in November 2021, Lincoln Argenbright; a special nephew, Larry Thornton; a sister-in-law, Anna Lee Rexrode of Hightown; and numerous nieces and nephews. In addition to her late husband, she was also preceded in death by a daughter-in-law, Donagrace Fisher; two sisters, Lucille Thornton and Mary Waybright; six brothers, Ashby, Berlie, Warren, Herbert, Forrest, and Everett Rexrode; and stepsister, Audrey Hevener and stepbrother, Boyd Pullin. A graveside service for family and close friends will be conducted on Thursday, October 7, 2021 at 11:00 A.M at Oak Lawn Mausoleum and Memory Gardens by Reverend Janet Knott and Mr. George Taylor. There will be no public viewing and visitation. Memorials may be made to the Highland County Humane Society, P. O. Box 458, Monterey, VA, 24465 or the Augusta Health Foundation, c/o Hospice of the Shenandoah P. O. Box 1000, Fishersville, VA, 22939. The family would like to thank all of the nurses, doctors, and caregivers for their compassionate care given to their mother over the past eight months. Henry Funeral Home is handling the arrangements. Condolences may be sent to the family at www.henryfuneralhome.net.

Isabelle Audrey (Rexrode) Fisher, 88, widow of John Franklin Fisher, of Stuarts Draft, VA passed away Sunday, October 3, 2021 at her residence. She was born in Hightown, VA on December 8, 1932 and was the daughter of the late Arthur and Grace... View Obituary & Service Information

The family of Isabelle R. Fisher created this Life Tributes page to make it easy to share your memories.

Send flowers to the Fisher family.