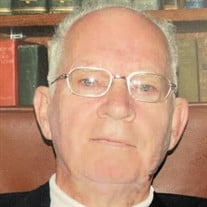 J. Joseph Johnson, Jr., 94, husband of Beverly O&#8217;baugh Johnson, passed away on Friday, September 17, 2021, at his residence surrounded by his loved ones. Mr. Johnson was born on October 13, 1926, in Staunton to the late John Joseph Johnson,... View Obituary & Service Information

The family of J. Joseph Johnson, Jr. created this Life Tributes page to make it easy to share your memories.