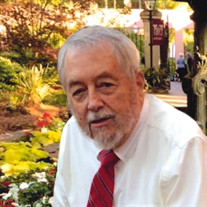 STAUNTON - J. Wade Munford, 87, husband of Anne Sharon (McClune) Munford, passed away on January 24, 2022. He was born on November 10, 1934 in Peterburg, Va, a son of the late Jethro Wade Munford, Sr. and Jessie (Adkins) Munford. Wade was a member of the Virginia United Methodist Conference and attended Cherryvale United Methodist Church. He was part of the first graduating class of Columbus State University in the early 1960’s and then went on to graduate from Emory Theological Seminar. Wade became an ordained minister in 1965 and continued to serve his Lord and community faithfully, even recently doing home visits. He began the R.O.C.K. Program in the community in the 1980’s, which helped get kids off the streets during the summers. He was also involved in the Va. Conference Youth Engaged in Service Program (YES) for 16 years, which produced more pastors than any other. In addition to his wife, he is survived by a son, Brian Wade Munford (Aimee) of Oregon; a daughter, Laura Munford Cardaropoli (Frank) of North Carolina; two step-sons, Ty Keegan (April) of Staunton, Mak Keegan, of Hawaii; 10 grandchildren, Lyndsey Keegan Baker, Kelsey Keegan Sprouse, Michael Cardaropoli, Maggie Cardaropoli, Miles Keegan, Nicholas Cardaropoli, Matthew Cardaropoli, Owen, Elias, and Neva Munford, a great-grandson, Wesley Beau Sprouse and numerous other cousins. A Celebration of Life will be conducted on April 2, 2022 at 11 a.m. at Cherryvale United Methodist Church by Pastor Jonathan Greer. The family will receive friends following the service. Memorial donations can be made to St. Judes Children Research Hospital, 501 St. Jude Place, Memphis, TN, 38105.

The family of J. Wade Munford created this Life Tributes page to make it easy to share your memories.

Send flowers to the Munford family.