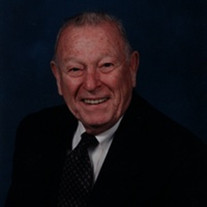 JAMES H. CREGER VIRGINIA BEACH, VA James H. Creger, 85, formerly of Staunton, Virginia passed away Monday, May 19, 2014 at Sentara Village in Virginia Beach, Virginia, where he had been a resident for 2 years. Born December 3, 1928 in Meadow Creek, WV, James was the son of the late Elmer N. and Lovina Blair Creger. He is survived by his loving wife of 64 years, Alma Creger, also a resident of Sentara Village, two sisters Norma Lewis of Daniels, WV and Martha Gunter of Beaver, WV; sons James H. Creger II of Glen Allen, VA, Thomas N. Creger of Birmingham, AL, daughter Diana C. Porter of Suffolk, VA and three grandchildren. He was pre-deceased by son Matthew S. Creger of Staunton. A veteran of the U.S. Air Force, Jim served his country during the Korean War. He managed the Pepsi Cola Bottling Plant in Staunton before opening his own business of many years, Creger Service Center. He also operated a second business, Creger's Services providing contract cleaning. He was a funny guy in Lions' Club shows for years and loved the corny jokes and Shaggy Dog stories and skits he and his troupe of comedic misfits would tell. He was an active member of Central United Methodist Church in Staunton. Jim also participated in several Staunton area coffee clubs and was a founding member at Kathy's on Greenville Avenue in Staunton. Jim was an avid gardener and the handiest handyman on the block. He will always be remembered as a loving husband, father and grandfather. A private graveside service will be held at Augusta Memorial Park at a later date. In lieu of flowers please make memorial contributions to the Staunton Augusta Rescue Squad where Jim was a dedicated volunteer for many years. Henry Funeral Home is handling the arrangements.

JAMES H. CREGER VIRGINIA BEACH, VA James H. Creger, 85, formerly of Staunton, Virginia passed away Monday, May 19, 2014 at Sentara Village in Virginia Beach, Virginia, where he had been a resident for 2 years. Born December 3, 1928 in Meadow... View Obituary & Service Information

The family of JAMES H CREGER created this Life Tributes page to make it easy to share your memories.

Send flowers to the CREGER family.