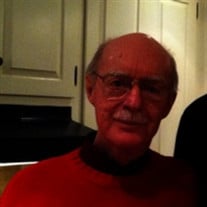 James S. Wamsley James S. Wamsley, aged 81, died April 14, 2012 at home. A journalist for 50 years, he had careers as newsman, magazine editor, and feature writer for many national magazines. The son of Mr. and Mrs. J. Hubert Wamsley Jr. of Staunton, VA, Wamsley graduated from Washington and Lee University. He joined the Air Force at the outset of the Korean War, and served as an editor at Supreme Headquarters, Allied Powers Europe. He later joined the Associated Press Bureau in Richmond, and then was editor of The Commonwealth, The Magazine of Virginia, for 19 years. A magazine and newspaper columnist, he was a contributor to national magazines since the 1960s and went freelance entirely in 1980. For 25 years, traveling widely around the world, he was a prolific feature writer for such publications as NATIONAL GEOGRAPHIC TRAVELER, ARCHITECTURAL DIGEST, GEO, and TRAVEL & LEISURE. In addition to about 300 feature articles for national publications, Wamsley wrote seven books, including two art volumes published by Harry N. Abrams, Inc. He was a member of the Virginia Communications Hall of Fame and held a Lowell Thomas Award for travel writing. He was a member of the Society of American Travel Writers, the American Society of Journalists and Authors, and served twice as chairman of that organization's Mid-Atlantic-Caribbean chapter. Gov. Charles Robb named him to the Virginia Travel Advisory Board. Wamsley was an energetic amateur mechanic, and collected and restored antique and classic sports cars, including a 1940 Buick Roadmaster four-door convertible, a 1955 TF MG roadster, and a 1921 Model T Ford. On retirement, his travels slowed by a lengthy bout with throat cancer, he became a self-taught and enthusiastic painter in oils, working in a style reminiscent of such early 20th Century illustrators as Howard Pyle. He was a member of Willow Oaks Country Club, The Virginia Museum of Fine Arts, the Highland County Historical Society, and the Virginia Historical Society (to which he donated a collection of antique photographic equipment that once belonged to "General Lee's Photographer," Michael Miley.) He and his wife, Gwendolyn Cooper Wamsley, who survives, lived at Westminster-Canterbury in Richmond and in a mountaintop house at Wintergreen, VA, from which he could see the lights of Staunton. In addition to his widow, he is survived by two children and their spouses, Robin and John Schilling of Richmond, and Cooper and Tamara Wamsley of Richmond. He leaves four grandchildren, Ryan Schilling of Richmond, Kate Schilling of New York City, Jacob Wamsley of Charlottesville, and Nicholas Wamsley of Richmond. A graveside service will be held at Thornrose Cemetery in Staunton on Monday, April 16, 2012 and a memorial service at Westminster-Canterbury, 1600 Westbrook Ave., Richmond on Tuesday, April 17, 2012 at 10:00. In lieu of flowers a donation to the Westminster Canterbury Employee Christmas Fund is suggested. Henry Funeral Home is handling the arrangements.

The family of JAMES SANFORD WAMSLEY created this Life Tributes page to make it easy to share your memories.

Send flowers to the WAMSLEY family.