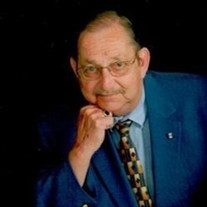 JERRY W. MEEKS VERONA, VA Jerry Winston Meeks, 68, husband of Gayle Lorene (White) Meeks, of 18 Kenwood Drive, died Sunday, October 20, 2013, at the University of Virginia Medical Center, Charlottesville. He was born August 12, 1945, in Staunton, a son of the late Henry Hawse and Helen Marie (Mizer) Meeks. In addition to his parents he was preceded in death by his sister, Doris Phillips. He was a member of Verona United Methodist Church, General Morgan Chapter of the Virginia Society Sons of American Revolution, Augusta County Genealogical Society, Shenandale Gun Club, Stonewall Rifle and Pistol Club, Inc., and Post 0013 of the American Legion. He was recognized as one of the first families of Augusta County. Mr. Meeks served in the National Guard for 20 years as Sgt. 1st Class with the Military Police Platoon of the 116th Infantry Brigade. Prior to retirement, he worked for VDOT for 41 years and also the Department of Corrections. In addition to his wife, family members include a daughter, Cynthia Marie (Meeks) Thornton and husband, John David "Buck" Thornton, Jr.; two grandsons, Dylan Connor and Colton Tyler Thornton; two brothers and sisters-in-law, Ronald and Ethel White of Springhill and Lynn and Martha White of Albemarle, NC; an aunt, Edith Mizer of Fishersville; a nephew; two nieces; two great nephews; and six cousins. He was the last surviving member of his immediate family. A funeral service will be conducted at 10 a.m. on Thursday, October 24, 2013, at Verona United Methodist Church by the Rev. Robert Weeks. Burial will follow in Oak Lawn Mausoleum and Memory Gardens. Graveside rites will be conducted by Augusta-Staunton VFW 2216. The family will receive friends from 7 until 8:30 p.m. Wednesday, October 23, 2013, at Henry Funeral Home. Jerry was a quiet man who enjoyed playing cards and researching his family back generations, but his special love was his two grandsons. Memorial contributions may be made to the Verona United Methodist Memorial Fund, P.O. Box 47, Verona, VA 24482.

The family of JERRY WINSTON MEEKS created this Life Tributes page to make it easy to share your memories.

Send flowers to the MEEKS family.