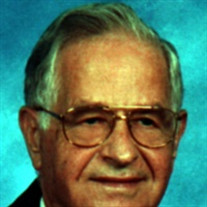 JOEL R. DICKERSON RICHMOND, VA DICKERSON, Joel Rush, passed away peacefully on Monday, February 25, 2013. He was born June 13, 1931 in Goodview, Virginia. He was preceded in death by his parents, Charles and Maude Dickerson, his brother, Thomas Dickerson, his sister, Virginia Griffin, and his wife, Patricia Ann Price Dickerson. He is survived by his sons, Michael R. Dickerson of Richmond, Virginia, and Stephen D. Dickerson of Staunton, Virginia, and Michael's wife, Janet. Joel graduated from Stewartsville High School (1950) and from Virginia Tech (1957). He served in the U.S. Army in the Korean War. Joel became well-known in the business community as one of the first to market photocopiers starting in 1961. He was one of 3M Company's top sales representatives and enjoyed numerous awards and recognition for his achievements. These included trips that he took to Europe and Hawaii with his wife, Patricia. Joel was an active member of Faith Lutheran Church where he served for many years on the Church Council and as Treasurer. Joel was always thinking of others and what he could do for them - from pushing cars out of the snow at Church to volunteering with Meals on Wheels after he retired from 3M. Even after Joel's health began to decline, he maintained his positive attitude, never complaining, and often offering a smile and a good word to others. Joel spent his last 3 years at Chestnut Grove Assisted Living in Richmond, Virginia, and the family wishes to thank the staff there for all of their hard work and compassion. The family will receive friends at Henry Funeral Home in Staunton from 6:00 p.m. to 8:00 p.m. on Thursday, February 28, 2013. The funeral service will be at 11:00 a.m. on Friday, March 1, 2013 at Pleasant View Lutheran Church, with Pastor Kenneth A. Price officiating. Burial will immediately follow at the Church cemetery.

JOEL R. DICKERSON RICHMOND, VA DICKERSON, Joel Rush, passed away peacefully on Monday, February 25, 2013. He was born June 13, 1931 in Goodview, Virginia. He was preceded in death by his parents, Charles and Maude Dickerson, his brother, Thomas... View Obituary & Service Information

The family of JOEL RUSH DICKERSON created this Life Tributes page to make it easy to share your memories.

Send flowers to the DICKERSON family.