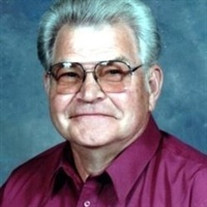 JOHN W. BACK, SR. SWOOPE, VA John Wesley Back, Sr., 80, widower of Nancy Back, of 232 Buffalo Branch Lane, passed Thursday, December 20, 2012, at his residence surrounded by his family. He was born July 20, 1932 in Staunton, a son of the late Aldine M. and Violet L. (Marshall) Back. Prior to retirement, Mr. Back was employed by Smith's Transfer and Waynesboro Nursery. He was a member of West View United Methodist Church. John and Nancy were avid church members and raised their family through the church. He was also a man of many talents and a kind and loving soul. In addition to his wife, he was also preceded in death by two brothers and sisters-in-law, James Roy and Agnes Back and A. Calvin and Linda Back; and three sisters and brothers-in-law, Ruby B. and W. Guy Eutsler, Dorothy B. and William Johnson, Sr., and Ellen B. and George A. Hanger. Family members include a son and daughter-in-law, J. W., Jr., and Missy H. Back of Swoope; four daughters and two sons-in-law, Linda B. and Glenn Skelton, Patricia B. Lyle, Barbara B. and Joseph Truxell, all of Swoope, and Judy K. Back of Fishersville and her fiance`, Todd Eye; seven grandchildren, Clint and wife, Aimee Lyle, Colt and wife, Ashley Lyle, Jami Lyle, Jodie and Brittany Truxell, and Josh and Jacob Back; four great grandchildren, Dylan Truxell, Mason Sprouse, Jordyn Hoffman, and Lindsay Lyle; a great grandchild to be born in February 2013; a number of nieces and nephews; a step grandchild, Phillip Truxell and his wife, Regina; and a step great grandchild, Autumn Hinkle. A funeral service will be conducted at 10:30 a.m. Saturday, December 22, 2012, in the Staunton First Church of God by the Rev. Donald Simmons. Burial will follow in Oak Lawn Mausoleum and Memory Gardens. Active pallbearers will be Steve Malcolm, Timmy Malcolm, Kenny Malcolm, Terry Back, Bill Lindsay, Kenny Hawkins, Jimmy Brown, Ray Cox, Roger Coon, and Tommy Snyder. The family will receive friends from 7 until 8:30 p.m. Friday, December 21, 2012, in the Henry Funeral Home and other times at his residence, 232 Buffalo Branch Lane, Swoope. Memorials may be sent to Staunton First Church of God, Building Fund, 1850 Shutterlee Mill Road, Staunton, VA 24401 or to a charity of one's choice. The family would like to thank UVA Dialysis Center, King's Daughters' Rehab Center, Eclipse Unit, Southern Care Hospice, and Priority One Transport.

The family of JOHN WESLEY BACK, SR. created this Life Tributes page to make it easy to share your memories.

Send flowers to the BACK, family.