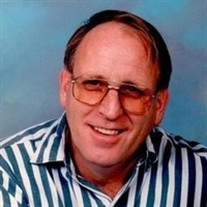 JOHN H. BALSER STUARTS DRAFT, VA John Henry Balser, 63, husband of Linda Balser of Stuarts Draft, died Thursday, October 17, 2013, at Augusta Health, Fishersville. He was born on September 11, 1950 in Augusta County, the son of the late Charles and Ida Alice (Edmond) Balser. Mr. Balser was employed by the City of Waynesboro Public Works. He previously worked for Sutters Furniture Store as a sander and delivery person. In his younger years, he was employed by Holsum Bakery. Mr. Balser loved gardening, Elvis, and especially spending time with his family. In addition to his wife and companion of 41 years, his family members include a son, Jason A. Brownlee of Stuarts Draft and his fiancé, Lisa Campbell; a daughter, Angie B. Simmons of Waynesboro and her fiancé, Paul Hogan; a special sister Louisia "Lou Lou" Shiflett of Mint Spring; sisters, Ida Mae Winegard and her husband, Bev of Verona, and Janet Marie Knott of Mt. Solon; grandchildren, Niki Solt and her husband, Joey, Lonnie Simmons, Jr., and Jennifer Simmons; and a number of great grandchildren, nieces, nephews and cousins. He is preceded in death by a sister, Charlotte McClain; a brother, Luther Balser; nephews, Rodney and Ronnie Huffman, and a granddaughter, Jill Simmons. A funeral service will be conducted at 11:00 a.m. on Friday, November 1, 2013 in the Henry Funeral Home Chapel by Rev. Warren Knott. Burial will follow in Oak Lawn Mausoleum and Memory Gardens. The family will receive friends from 5 until 7 p.m. on Thursday, October 31, 2013 at the funeral home. Memorials may be made to Hospice of the Shenandoah, P.O. Box 215, Fishersville, VA 22939.

The family of JOHN HENRY BALSER created this Life Tributes page to make it easy to share your memories.

Send flowers to the BALSER family.