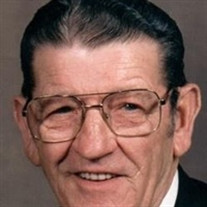 JOHN H. SHEFFER, JR. STAUNTON, VA John Henry Sheffer, Jr., 90, husband of Viola (Rexrode) Sheffer, of Staunton, died Thursday, August 2, 2012, at his residence. He was born December 27, 1921, in Staunton a son of the late John Henry, Sr., and Lucy (Taliaferro) Sheffer. He served his country in the U.S. Army Air Force 211th AAR Base Unit during World War II. Prior to retirement on May 1, 1977, he was employed by C & O Railroad with 31 years of service and served as a ticket agent for Amtrak with 5 years of service. He was a life member of the Railroad Brotherhood and Railroad Association and also a life member of the Staunton VFW Post 2216. He was a life member of First Baptist Church, joining the Cradle Roll on January 1, 1922. He served as an usher and secretary of the Fellowship Class for many years. In addition to his wife, to whom he married on March 14, 1944, family members include a son and daughter-in-law, Gary Wayne and Lynda Sheffer; two grandchildren, John Lawrence Sheffer of Staunton and Kantrice S. Groah and her husband, Jamie of Buena Vista; three step grandchildren, Scott and April Baker, and Beth Mueler; four great grandchildren, John H. Sheffer, III, Destiney Brook Groah, Bryan Groah, and Nathaniel Lee Roberson; two step great grandchildren, Alexis and Caley Baker; and nieces and nephews, Betty Cash, Mary Moran and her husband, Jerry, Rose Marie Roe, and Basil Miller and his wife, Dixie. He was preceded in death by two brothers, Wallace "Chink" Sheffer and Edward C. Sheffer and a sister, Ruby Sheffer Miller. He was the last surviving member of his immediate family. A funeral service will be conducted at 10 a.m. Saturday, August 4, 2012, in First Baptist Church by the Rev. Dr. Steve Traylor, assisted by Rev. Gary Sheffer. Burial will follow in Thornrose Cemetery. Graveside rites will be conducted by Staunton VFW Post 2216. Active pallbearers will be Lloyd Painter, Ronnie Young, Dale Jones, Harold Smiley, Ray Meek, and Thomas King. Honorary pallbearers will be ushers of First Baptist Church, members of the Fellowship Sunday School Class, Dr. John Marsh, Marvin Strickler, Allen Peterson, Mickey Perkins, Larry Mayer, and Larry Thompson. The family will receive friends from 6 until 8 p.m. Friday, August 3, 2012, in the Henry Funeral Home. In lieu of flowers, memorials may be made to First Baptist Church, 406 W. Frederick Street, Staunton, VA 24401. A special thanks to Dr. John Marsh and his staff for their care of John for for many years, to Gayle Mayer, his special caregiver, and the staff of Hospice of the Shenandoah.

The family of JOHN HENRY SHEFFER,JR created this Life Tributes page to make it easy to share your memories.

Send flowers to the SHEFFER,JR family.