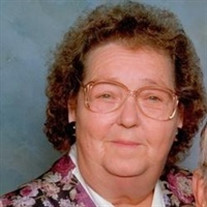 JULIA D. ALEXANDER VERONA, VA On Monday September 9, 2013 in the Augusta Health Hospital, Julia, "Judy", (Dunsmore) Alexander, 86, wife of Paul Gardner Alexander, formerly of 63 Maury Mill Road joined her Heavenly Father and loved ones. She was born October 1, 1926, in Verona a daughter of the late Leroy and Joy (Shumate) Dunsmore. Mrs. Alexander was a lifelong resident of Verona and a member of Verona United Methodist Church for over 70 years. She was an honor graduate of Dunsmore Business College, which was founded by her great-grandfather. In addition to her husband, family members include a daughter and son-in-law, Cindy A. and Sonny Roberts of Forest, a son and daughter-in-law, Wendell and Sara H. Alexander of Glen Allen: one grandson, Jacob W. Alexander of Glen Allen; three brothers, Howard Dunsmore and his wife, Nancy, of Stuarts Draft, Jake Dunsmore and wife, Jean, of Mount Sidney and Danny Dunsmore of Buggs Island; special friends, Barbara Bryant and Phyllis Mauzy; and a number of nieces and nephews. She is preceded in death by a grandson, Andrew W. Alexander; and a sister, Evelyn D. Van Pelt. Prior to marriage Judy worked for Coca-Cola Bottling of Staunton and Southern Electric where she met Paul. After their children were in school she taught the three-year-old class at the Genesco Daycare Center in Verona. Most importantly she was an affectionate, doting, soft spoken, selfless Mother, Grandmother, and wife. A great joy in her life was spending time with her children and grandchildren, and feeding them! Each day she shared her faith by her actions. Her patience, gentleness, self-control, and positive attitude were a virtue admired by many. Mrs. Alexander chose to speak in a kind, helpful, encouraging way even during her extended ill health. A memorial service will be conducted at 2 p.m. Thursday, September 12, 2013, in Verona United Methodist Church by the Rev. Robert J. Weeks and the Rev. David Burch. Burial will be private. The family will receive friends following the service. In lieu of flowers contributions may be made to Verona United Methodist Church P.O. Box 47-406 Lee Highway, Verona VA, 24482 to benefit VUMC Day Care and VUMC Food Pantry. Henry Funeral Home is handling the arrangements.

The family of JULIA DUNSMORE ALEXANDER created this Life Tributes page to make it easy to share your memories.

Send flowers to the ALEXANDER family.