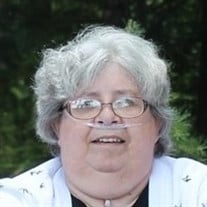 JULIA C. HAMILTON STUARTS DRAFT, VA Julia Patricia Ann (Cash) Humphrey Hamilton, 65, widow of George Hamilton, of 104 Patton Farm Road, died Wednesday, August 28, 2013 at Stuarts Draft Christian Home. She was born May 6, 1948, in Staunton, a daughter of Earl Bryant Cash of Staunton and the late Juanita Virginia (Groah) Cash. Mrs. Hamilton was employed by the Adult Protective Services of Staunton/Augusta County. She was an active member of the Stuarts Draft Christian Home community. She was a member of Christ United Methodist Church and Calvary United Methodist Church. In addition to her husband and mother, she was also preceded in death by her first husband, Larry Eugene Humphrey and by a brother, Jerry Wayne Cash. In addition to her father, family members include her step-mother, Aileen Cash; a son, Jeffrey Dean Humphrey of Staunton; a daughter, Amy Rebecca Dill and her husband, Karel, of Edinburg; a step-son, George Hamilton and his wife, Heather, of Raeford, North Carolina; a brother, Earl David Cash and his wife, Violet, of Waynesboro; a sister, Evelyn Joyce Thompson of Staunton; two grandchildren, Rebecca Lee Ergenbright and Charles Brenden Ergenbright; five step-grandchildren, Jacob, Cherish, and Quentin Hamilton and Kyle and Katelyn Dill; and her dog, "Sam". A memorial service will be conducted at 11 a.m. on Thursday, September 5, 2013, in Calvary United Methodist Church by Pastor Doug Paysour. The family will receive friends from 6 until 8 p.m. Wednesday, September 4, 2013, at Henry Funeral Home. The family would like to send a special thanks to Hospice of the Shenandoah.

The family of JULIA CASH HAMILTON created this Life Tributes page to make it easy to share your memories.

Send flowers to the HAMILTON family.