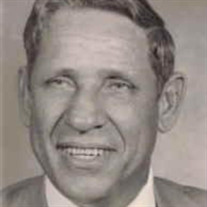 James Paul Bennett, age 92, answered the call of his Savior, Jesus on 08/13/2020. He passed at Augusta Health Hospital with his daughters by his side. His wife of 67 years, Ella Mae C. Bennett, predeceased him in 2019. They are survived by two daughters, Sharon Lorraine Bennett Smith and Teresa Ann Bennett Whelan. Sharon married Jack Smith and gave Mr. Bennett two grandsons, David and Jonathan. Sharon and Jack reside in Waynesboro, VA; David lives in Tempe, AZ; and Jonathan lives in St. Petersburg, FL. Jonathan with his wife Kristi gave Mr. Bennett four great-grandchildren: Jack, Jason, Jonah, and Kathryn. Teresa married David Whelan and gave Mr. Bennett two grandchildren, Benjamín and Jessica. Teresa and Dave reside in Arlington, VA; Benjamin lives in Falls Church, VA; and Jessica lives in Arlington, VA. Despite the distances, all of Mr. Bennett's family remains close. Mr. Bennett was born in Drennan, WV to Oliver Egbert and Ada Jane Neil Bennett, both deceased. Mr. Bennett was also preceded in death by brothers Arthur, Neil, Everett, Roy, Richard, and Robert Bennett and sisters Olive Bennett, Sylvia Harris, and Irene Gertrude Bennett. He is survived by numerous nieces and nephews. Mr. Bennett was a veteran of two wars. He served aboard several Merchant Marine ships during World War II and in the Army during the Korean War. He was a member of the Veterans of Foreign Wars and the American Legion. Working for Western State Hospital for 42 years, Mr. Bennett retired as Director of Physical Plant Services in 1992. During his tenure he was recognized with numerous awards, including, most notably, the Commonwealth of Virginia’s Mental Health Department Employee of the Year for Support Services. He also served on the Board of Directors of the Virginia State Employees Association and held several offices in the local chapter of the National Association of Power Engineers. He served as a deacon and an elder in the Third Presbyterian Church of Staunton. Mr. Bennett was quick to lend a helping hand to others and was known for his great and sometimes mischievous sense of humor. He was a dedicated husband and father. His marriage to Ella for almost 67 years was a model for many who knew them. Paul had a true love of lifelong learning and was renowned for his accurate memory for events even in the distant past. Regretfully, COVID-19 prevents the family from a traditional visitation. Henry Funeral Home will be open from 12 until 7 p.m. Sunday, August 16, 2020, for anyone who wishes to visit Paul one more time or leave a message. Condolences may be sent to the family online at www.henryfuneralhome.net. A graveside service will be conducted at 10 a.m. Tuesday, August 18, 2020, in Augusta Memorial Park by Pastor Peter Grimm. Honorary pallbearers will be David Smith, Jonathan Smith, Jack Smith, David Whelan, Benjamin Whelan, Jessica Whelan, Forrest Harris, Clay Bennett, Harold Bennett, Robert “Bobby” Bennett, Fred Bennett, and Richard “Anthony” Bennett. Those who knew Paul feel the tremendous loss of a dear father, grandfather, or friend; but all rejoice in having known him and in his ability to make us laugh and learn. In lieu of flowers, memorials may be made to the CMT Research Foundation, 4062 Peachtree Road, 209, Atlanta, GA 30319 or online at cmtrf.org/donate.

James Paul Bennett, age 92, answered the call of his Savior, Jesus on 08/13/2020. He passed at Augusta Health Hospital with his daughters by his side. His wife of 67 years, Ella Mae C. Bennett, predeceased him in 2019. They are survived... View Obituary & Service Information

The family of James P. Bennett created this Life Tributes page to make it easy to share your memories.

James Paul Bennett, age 92, answered the call of his Savior,...

Send flowers to the Bennett family.