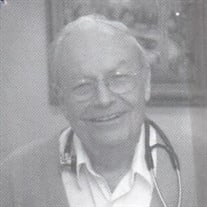 James Albert Higgs, Jr., MD, 93, widower of Patricia Lee (Montague) Higgs, of Fishersville, died Wednesday, January 27, 2021, at Shenandoah Nursing Home. His family moved to Staunton when he was a child, where his father was a partner in Higgs and Young. After graduating from Beverly Manor High School, he attended Hampden-Sydney College. In 1945, during his second semester at Hampden-Sydney, he joined the Naval Reserve, and trained in Bethesda as a Pharmacist’s Mate, 3rd class. He was about to be sent to the Pacific theatre when the war ended. He stayed in Bethesda, and worked at the hospital there for the next two years to care for the returning wounded. He then completed his undergraduate studies at Hampden-Sydney, after which he pursued his medical degree at the University of Virginia, graduating in 1954. During this time, he married his wife Pat in 1951. After graduating from medical school, they moved to Baltimore, Maryland, where he completed a two year internship and one year residency in family practice at Mercy Hospital. He and his family moved back to Staunton in 1956, where he practiced in Churchville with Dr. Eugene Nolley, before starting his solo practice in Staunton in 1957. During his early years, he delivered many babies who later became his adult patients. While in practice, he was granted staff privileges at King’s Daughters’ Hospital, and served as one of the presidents of the medical staff. He also belonged to the American Medical Association, Augusta Medical Society, Virginia Medical Society, Virginia Family Practice Association, and was a life member and fellow of the American Association of Family Practice. After retiring in 1997, he continued to work as an associate staff doctor of Augusta Health in their Verona office. He also volunteered at the Augusta Free Clinic for many years. Jim joined First Presbyterian Church as a youth, and later served as a deacon and Elder, and sang in the church choir as a bass soloist, alongside his wife Pat. His other interests included gardening and keeping choral music alive. He especially loved growing beautiful roses, and was a member of the Shenandoah Rose Society and American Rose Society. His lifetime love of music included playing the piano, trombone, and mandolin during his youth. In 1962, he founded and was the first president of the Staunton Choral Society, with Pat joining him in the choir for many years. They also sang with the Shenandoah Choral Society and were members of the Ovation Singers. Jim additionally took on the role of Captain of the H.M.S. Pinafore in the Waynesboro Players’ musical production. He and Pat loved to have sing-alongs at family gatherings, and later in life led sing-along programs in various places, such as church dinners, YMCA luncheons, the Staunton library, and retirement homes. Jim led the singing, and Pat was the pianist. Jim is remembered by his family, friends, and patients as a kind, patient, loving, and gentle man, and will be surely missed by all who knew and loved him. In addition to his wife, he was also preceded in death by a son, James Blackford Higgs and a brother, William D. Higgs. Family members include two daughters, Deborah A. Higgs of Alexandria and Cynthia L. Higgs of Fishersville; two brothers, Edward B. and John R. Higgs; a sister, Brooke Higgs Deacon; four grandchildren, Brian and John Coakley, and Jonathan and Audrey Fulk; and a great grandchild, Phoenix Coakley. A graveside service will be conducted at 2 p.m. Tuesday, February 2, 2021 in Thornrose Cemetery by the Rev. Karen H. Allamon. Honorary pallbearers will be Edward B. Higgs, John R. Higgs, Daniel Coakley, Brian Coakley, John Coakley, Jonathan Fulk, Lee Deacon, Audrey Fulk, and Cheryl McKay. The family will receive friends from 3 until 7 p.m. Monday, February 1, 2021, in the Henry Funeral Home. In lieu of flowers, memorials may be made to the Staunton Augusta Rescue Squad, 1601 North Coalter Street, Staunton, VA 24401 or to First Presbyterian Church, 100 E. Frederick Street, Staunton, VA 24401. The family would like to thank all of the staff at Shenandoah Nursing Home for their outstanding support and loving care they have given to Jim and Jim’s family, especially during this past year. Condolences may be sent to the family at www.henryfuneralhome.net.

James Albert Higgs, Jr., MD, 93, widower of Patricia Lee (Montague) Higgs, of Fishersville, died Wednesday, January 27, 2021, at Shenandoah Nursing Home. His family moved to Staunton when he was a child, where his father was a partner in Higgs... View Obituary & Service Information

The family of JAMES ALBERT HIGGS JR. created this Life Tributes page to make it easy to share your memories.

Send flowers to the HIGGS family.