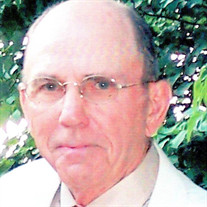 James Michael “Jim” Skinner, 78, born October 10, 1941 in Evansville, Indiana and raised in Clay, Kentucky where he was known as Butch, went to his heavenly home August 18, 2020. Jim was a very respected pipeline and grading contractor in Virginia, North Carolina, South Carolina, and Georgia and owner of Highland Pipeline Construction in Monterey for many years. He was a member of Highland Masonic Lodge #110 having been a Mason for over 50 years. Jim was an avid hunter and loved to bear hunt with his many friends and family in Highland County. He knew how to throw a great party and was known for his BBQ. Jim was a loyal Dale Earnhardt No. 3 fan, having watched him race on dirt tracks up through NASCAR. He will be so missed by his family and friends. Rest in peace “44”. Family members include his wife, June (Threlkeld) Skinner of Swoope; daughters, Michelle Nalley (Chris) of Henderson, KY, Kimberley Ellnor of New Albany, Indiana, and Amy Mullins (Billy) of Churchville; sons, Kevin Skinner of New Albany, IN, David Parker (Leigh) of Charlotte, NC, and Dale Lanham (Wendy) of Charlotte, NC; a daughter-in-law, Kathy Skinner of Mooresville, NC; his beloved aunt, Patsy Martin of Clay, KY; 18 grandchildren; and three great grandchildren. He was preceded in death by his parents, James and Ruby Mae “Dot” Skinner; sister, Sammi Shoulders; his sons, James Michael “Mike” Skinner, Jr. and Don Lanham; and his very dear friend of 40 plus years, Dewey Sanders. A casual outdoor celebration of Jim’s life will be held at 1:30 p.m. Saturday, August 29, 2020, at 10677 Mountain Turnpike (Route 250), Clay Hise Lane, Monterey, VA. Memorials may be made to Hospice of the Shenandoah, c/o Augusta Health Foundation, P.O. Box 1000, Fishersville, VA 22939. Henry Funeral Home is handling the arrangements.

James Michael &#8220;Jim&#8221; Skinner, 78, born October 10, 1941 in Evansville, Indiana and raised in Clay, Kentucky where he was known as Butch, went to his heavenly home August 18, 2020. Jim was a very respected pipeline and grading contractor... View Obituary & Service Information

The family of James "Jim" Skinner created this Life Tributes page to make it easy to share your memories.

Send flowers to the Skinner family.