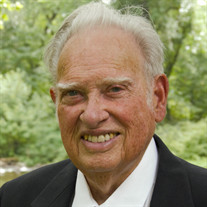 James Mays Vaughn, 93, of Kill Devil Hills, NC and Verona, VA passed away on Tuesday, January 26, 2021, at the Outer Banks Hospital in Nags Head, NC. Mr. Vaughn was born in Miami, FL on July 18, 1927, a son of the late John “Mays” Vaughn and Rosabel (Matthews) Vaughn of Ashford, AL. Mr. Vaughn was preceded in death by his wife, Helen “Pinky” Vaughn; a brother, Bill Vaughn; a brother, Roland Vaughn; and a son-in-law, William Kerry, Jr. Surviving is a daughter, Linda Kerry of Verona, VA and granddaughters, Caitlin Anderson with great grandchildren, Kayleigh and Jenna of Poplar Branch, NC and Lindsey Smeltzer and her husband, Christian of Orangevale, CA; a daughter, Sheryl Mills and her husband, Rev. Larry Mills of Boiling Springs, PA; and grandchildren, Adam Mills and his wife, Natalie with great grandchild, Carter of Reno, NV; Carolyn Farner and her husband, Jason with great grandchild, Brighton of Mechanicsburg, PA; Alicia Mills with great grandchildren, Sophia and Jacob of Camp Hill, PA; Lauren Maurer and her husband, Thomas with great grandchildren, Arlo and Miles of Lemoyne, PA; David Mills and his wife, Nanyamka with great grandchildren, Elijah, Amirah, and Kiarah of Murfreesboro, TN; a daughter, Barbara J. Vaughn of Henryville, PA with grandchild, Andrew D. Vaughn of Cranston, RI. He lived in Washington Township, New Jersey for 40 years, before retiring to the Outer Banks. When Jim was 15 years old and in High School in Miami, Florida he worked at Jackson Memorial Hospital cleaning up hospital operating rooms after school and weekends. Jim attended the University of Miami, FL in 1945 as a pre-med student and was promptly drafted into the US Army. While in the US Army, Jim’s father had a heart attack and since he was the oldest son received an Honorable Discharge so he could help his family. Jim was then a Lineman/Installer for Southern Bell Telephone Company for 3 plus years in Miami, FL. Jim spent almost five (5) years attending Alabama Polytechnic Institute College now named Auburn University in Auburn, Alabama. Jim worked and attended classes the rest of the time and married Helen “Pinky” while in College and he had two girls (Linda and Sheryl) before graduating in 1954 with a BS in Electrical Engineering. After graduating, Jim was employed with Bendix Aviation as an Engineer and had another daughter (Barbara). Jim spent 18 years employed in various Aerospace industries in New Jersey and 17 years employed in the New York City Fire Department as a Contracts Manager. Jim retired from the New York City Fire Department in 1990. Jim’s wife, Helen passed away in 2007. The family will receive friends from 2 – 4 p.m. Sunday, January 31, 2021, weather permitting, at Henry Funeral Home, 1030 West Beverley Street in Staunton, VA. If necessary, due to weather, the family will receive friends from 2 - 4 p.m. Monday, February 1, 2021 at the funeral home. There will be a private graveside service at Culpeper Virginia Veterans National Cemetery, 501 E. Chandler Street, Culpeper, VA. Jim’s family wishes to express a sincere “Thank You” to the nursing staff at OBX Hospital for the love and care shown to him during his stay. Condolences may be expressed to the family to P.O. Box 173, Verona, VA 24482 or online at www.henryfuneralhome.net.

The family of James Mays Vaughn created this Life Tributes page to make it easy to share your memories.

Send flowers to the Vaughn family.