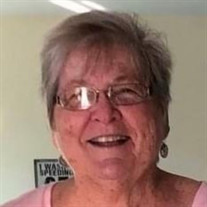 Jane Pendelton (Campbell) Wilson, 68, of Staunton, died on Wednesday, August 18, 2021 at King’s Daughters’ Community Health and Rehabilitation Center. She was born February 17, 1953 in Staunton, daughter of the late John Thomas “Jack” and Mabel Virginia (Whitesell) Campbell. Jane was a member of Greenville United Methodist Church. She is survived by two daughters and a son-in-law, Stephanie and Todd Wade, and Ann Nelson; three brothers and two sisters-in-law, Joseph Edward and Becky Campbell, John Wayne Campbell, and Wayt Finley and Tammy Campbell; four grandchildren, Hunter Nelson, Shooter Nelson, Ty Wade, and Dylan Wade and his wife, Rachel; one great grandchild, Evah Wade; and several nieces and nephews who loved their Aunt Janie. In addition to her parents, Jane was preceded in death by her sister, Brenda Diane Campbell. A celebration of her life will be held at 3:00 p.m. on Monday, August 23, 2021 in Greenville United Methodist Church by the Rev. James Bollinger. The family will receive friends one hour prior in the church. The family extends their heartfelt appreciation to the strong women who provided care to Jane in her final days and weeks. In lieu of flowers, memorial donation may be made to the Greenville United Methodist Church, 126 Main Street, Greenville, VA 24440.

The family of Jane C Wilson created this Life Tributes page to make it easy to share your memories.

Send flowers to the Wilson family.