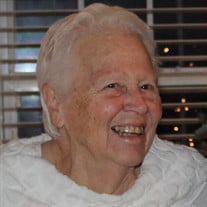 Janet H. Locklear of Staunton, Virginia passed away on May 21, 2020, the last day of her 85th year, at the University of Virginia Medical Center following a brief illness. She was welcomed into her heavenly home by her loving husband of 60 years, Earl, who had been waiting just 2 short months. Janet was born near Craigsville, VA on May 22, 1934, the third child of James M and Mae H Hoylman. Janet grew up in Fordwick, VA where her father was office manager of the Lehigh Portland Cement plant. She attended Craigsville High School and excelled at both academics and athletics. Upon graduation she attended King College in Bristol, TN where she was recognized for her continued academic success and her early leadership skills. Following 2 years at King, Janet was accepted into the first Bachelors of Science in Nursing (BSN) Class at the Medical College of Virginia. Janet was a Nursing professional in the best and truest sense of the words. Her career spanned 40 years and included everything from bedside and public health nursing to nursing leadership and administration. She will be best remembered for the 20 years she served as Director of Nursing at King’s Daughters Hospital in Staunton. Always an advocate for patients, Janet was known for her compassionate heart and firm hand. She ran a tight ship resulting in exceptional Joint Commission reviews and a reputation for quality care. Having responsibility for many of the hospital services including all nursing services, central supply, and housekeeping, she had the opportunity to touch the lives of hundreds of King’s Daughters’ employees over the years. Upon retirement from King’s Daughters, Janet returned to her first love, teaching. She would spend the remainder of her career teaching and mentoring young and old alike in the art and science of patient care. In 1976, Janet was recognized by MCV and awarded the Outstanding Nurse Alumnus for her leadership and dedication to the profession. Always a community activist, Janet held leadership roles in the local chapters of the Virginia Heart Association, the Quota Club, the Virginia Nurses Association to name a few. She was a founding board member of the Westside Swim Club. In 1978, she led a successful effort to force Anheuser Busch to withdraw its new “baby beer” soft drink, Chelsea, from shelves nationwide and appeared on the CBS Evening News with Walter Cronkite. Janet and Earl retired to Wilmington, NC in 1998 to be closer to their grandchildren and to enjoy the coastal lifestyle. Janet was a regular volunteer at Eaton Elementary School and served on the New Hanover County Adult Home Care Advisory Committee. They were dedicated members of Covenant Presbyterian Church in Staunton and Little Chapel on the Boardwalk in Wrightsville Beach. Janet loved to sing and was a regular in the choir up until the last few months. Janet and Earl returned to the Valley in 2012 and resided at the Sunnyside Community in Harrisonburg until recently. Janet is survived by her sister, Carol Way Meyer and husband Richard Meyer of Harrisonburg, Va., sons, Kent and wife Cindy of Wilmington, NC and Mark of Pinehurst, NC, and daughter Valerie and husband Doug Rohr of Verona, Va. Also surviving are her treasured grandchildren, Rachel, Jacob and Caroline Locklear of Wilmington and Jackson and Avery Locklear of Pinehurst. Janet leaves behind many nieces and nephews who also brought her great pride and joy. While the family was not prepared to let Janet leave us behind, we are comforted to know that in her final days she was surrounded by the very people she had worked her entire life to teach and lead and that they cared for her with the compassion and professionalism that would make her proud. In light of the current situation, the family plans a private burial and will honor Janet with a memorial service in Staunton at a later date. Henry Funeral Home is handling the arrangements.

Janet H. Locklear of Staunton, Virginia passed away on May 21, 2020, the last day of her 85th year, at the University of Virginia Medical Center following a brief illness. She was welcomed into her heavenly home by her loving husband of 60... View Obituary & Service Information

The family of Janet H. Locklear created this Life Tributes page to make it easy to share your memories.

Janet H. Locklear of Staunton, Virginia passed away on May 21,...

Send flowers to the Locklear family.