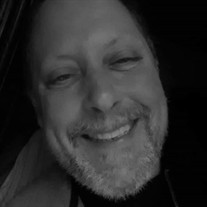 Jeremiah Anthony (Jerry) Polizzotti, 59, of Hasbrouck Heights, formerly of Saddle Brook, NJ passed away Monday, March 23, 2020, at the home of his daughter Jennifer in Stuarts Draft, Virginia. He was born on July 7, 1960, in Passaic, New Jersey and was the son of Bart Polizzotti and the late Marilyn (McFarlane) Polizzotti. Jerry was a veteran of the U.S Navy. proudly serving for 9 years. After an injury caused him to leave the Navy, he worked as a machinist and mold maker of surgical implants. Anyone who knew Jerry understood that his passion was his amazing toy collection, featuring Batman memorabilia. He had been interviewed many times regarding the collection on both television and in print. He was given the nickname “The Batman of Bergen” after being featured on the cover of the Record Newspaper and wall calendar. His collection was well into the thousands, and he found much joy showing admirers the upstairs “Batcave” as he called it. He never let anyone leave without a toy in hand, as his generosity was overflowing, He also treasured classic cars, and could be seen driving his ‘55 Chevy Bel Air around northern NJ. His hobbies included bowling, playing pool, riding his Harley and making people laugh. He always had a wonderful smile and kind demeanor that made him greatly loved. He will be terribly missed by all who knew him. Jerry’s family and his children made his life complete. Jerry had been married to wife Fran Polizzotti for over 25 years. He adored his children who include daughter Jennifer Potter (son in law William Potter), and sons Christopher Polizzotti and Matthew Polizzotti. His siblings included Bart Polizzotti (wife Lori, daughter Aimee), sister Jean Oviedo (sons Jayson, Justin, & Darren), and Joseph Polizzotti (wife Elizabeth “Bunny”, sons Joseph, Nicholas, and daughter Elizabeth). His grandchildren Nolan Wayne, Avery Ann, and Jeremiah Joseph Potter meant the world to him and along with treasured uncle, Jeremiah McFarlane, rounded out his loving family. Jerry shared a passion for animals and their rescue and care and was surely welcomed by the many pets with whom he has been warmly reunited. Cremation was private at the request of his family who will be holding a memorial service at a later date. In lieu of flowers, a memorial gift to the American Diabetes Association or the American Cancer Society would be truly appreciated. Henry Funeral Home is handling the arrangements. Condolences may be sent to the family at www.henryfuneralhome.net.

Jeremiah Anthony (Jerry) Polizzotti, 59, of Hasbrouck Heights, formerly of Saddle Brook, NJ passed away Monday, March 23, 2020, at the home of his daughter Jennifer in Stuarts Draft, Virginia. He was born on July 7, 1960, in Passaic, New Jersey... View Obituary & Service Information

The family of JEREMIAH ANTHONY POLIZZOTTI created this Life Tributes page to make it easy to share your memories.

Send flowers to the POLIZZOTTI family.