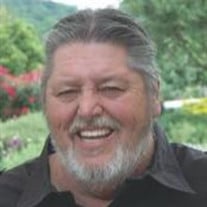 Jerome (Jerry) Moniot passed peacefully at home on the morning of September 26, 2020. Although mourned by his wife, Susan, and his family and friends, we rejoice that he is now free of pain. He was the epitome of a loving companion, father, and loyal friend. Jerry was born in 1942, and grew up on Staten Island in New York City. He graduated from Fordham University with a B.S. in Pharmacy and received a Ph.D. in Medicinal Chemistry from the University of Wisconsin. After an extended post-doctoral stint at Penn State, he joined E.R. Squibb (later, Bristol Myers Squibb) pharmaceutical company. He retired in 2001 as Executive VP in charge of Worldwide Chemical Development. Jerry and Susan relocated to Staunton having fallen in love with the beautiful Shenandoah Valley. Jerry was able to pursue his interest in woodworking in his new shop and, over the years, many friends and family have received gifts of his artistic furniture, boxes and trays. We know that Jerry’s spirit will forever live in his workmanship. Jerry, with Susan, was always happiest when hosting parties with good friends, good food and, of course, good wine. Their annual Christmas party was considered by many to be the start of the Holiday season. A good cigar on the back patio was a year round pleasure. Jerry loved history and travel. He had a sharp, inquisitive mind and read widely, especially on World War II. He was always happy to critique war movies and correct inaccuracies, much to the consternation of his wife and other movie goers! Jerry was preceded in death by his parents, sisters, Jean and Shirley, and brother, Larry. Jerry is survived by his heartbroken wife of 36 years, Susan, son, Daniel, daughter, Deborah, and 3 grandchildren. Survivors also include twin sisters, Joan and Janet, and numerous well-loved nieces and nephews. A celebration of life is planned in a safer 2021. Condolences can be expressed online at www.henryfuneralhome.net. The Moniot Family would like to thank especially his caregiver of over 2 years, Kassi Raynes, who not only gave him the best of care but also her love and devotion. A good man. He will be missed by all. Henry Funeral Home is handling the arrangements.

Jerome (Jerry) Moniot passed peacefully at home on the morning of September 26, 2020. Although mourned by his wife, Susan, and his family and friends, we rejoice that he is now free of pain. He was the epitome of a loving companion, father,... View Obituary & Service Information

The family of JEROME L. MONIOT created this Life Tributes page to make it easy to share your memories.

Jerome (Jerry) Moniot passed peacefully at home on the morning...

Send flowers to the MONIOT family.