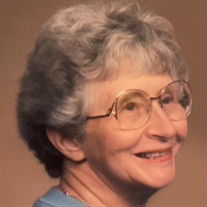 Joan (pronounced Jo Ann) "Josie" Aron passed peacefully from this world to be with her Lord and Savior Jesus Christ at her residence in the memory care unit of Brightview Baldwin Park in Staunton, VA. Josie was born in Ripley, NY, the youngest of 11 children of Zadie Wade (Hewitt) Cross and Clyde Dillworth Cross. The tight weave of a large family and caring neighbors carried her through smallpox, scarlet fever, farming accidents, family deaths and other hardships of the times. She graduated from Ripley Central School in 1948 and resided in Ripley until her marriage to Robert "Bob" Aron of Erie, PA in 1954. The couple raised their four children in the Erie area, eventually moving to Point Chautauqua, NY in the mid-1990s and wintering in Marco Island, FL. Josie led a life marked by humility and service. Her lifelong pattern of selfless devotion manifested early on when Josie, the salutatorian of her senior class, chose to forgo college and dreams of teaching in favor of nurturing her beloved parents in their later years. In Erie, she became an active volunteer at her children's schools, a longtime member of Trinity Lutheran Church, and a steadfast presence at Saint Vincent Hospital, where she volunteered for over 30 years. She also volunteered at the Mayville, NY library. Together with Bob, Josie co-owned Erie's Colonial Bakery from the late 1960s through the late 1980s. While Bob, who founded the bakery with his parents in the1940s, was the "face" of the business, Josie was the backbone, keeping the books, stepping in to serve customers during busy times, and performing myriad behind-the-scenes feats that contributed to the popularity and success of the business. Josie's loving constancy and the depth of her care radiated out through numerous relationships she cultivated among her family, friends and neighbors. In each of her communities, she readily extended a helping hand, listening ear, and warm smile to all. Recalling her feelings of isolation as a newlywed and young mother in Erie's rural outskirts, she orchestrated a social club for younger women new to the neighborhood. A self-described "people person," her unassuming nature and twinkling blue eyes continued to attract people, even in the later stages of Alzheimer's. Josie's keen intellect and creativity shone through her dry wit, poetic sense, and numerous interests. A true wordsmith, she sought solace in books, reveled in a daily crossword, and was a force to reckon with at word games of all sorts. She was a fierce but friendly competitor at the card table and in her weekly bowling league. Not to be outdone by Bob, she was a skilled baker and especially known for making and sharing her perennial batches of delicious homemade jams. Josie was preceded in death by her beloved husband of 66 years, Bob Aron; her parents; and her ten siblings. She is survived by her four children: Phillip Aron (Donna) of Boynton Beach, FL; Jacquelyn Bednarz (Gregory) of Staunton, VA; Cheryl Bielli (Tom) of Gloversville, NY and Keith Aron of Easthampton, MA. Seven grandchildren will forever cherish the memory of their beloved Grandma: Brianne (Christopher) Sale; James Bielli, Robert F. Aron, Samantha Bielli, Kayleigh Aron, Alexandra Bielli and Charles Wang. Josie was “Meemaw” to three great-grandsons: Rylan, Brayson, and Camden Sale. She was also a devoted aunt, cousin, and sister-in-law to many in both the United States and Europe. With profound gratitude the family recognizes the caring, competent teams at Brightview Baldwin Park and Augusta Health Hospice of the Shenandoah that not only assisted with daily activities but befriended, entertained and prayed with Josie. A celebration of this full life well-lived will be held at a later date and place to be announced by her family. Henry Funeral Home in Staunton is handling the arrangements. Condolences may be sent to the family at www.henryfuneralhome.net. The family invites those who wish to honor Josie's memory to contribute to the Alzheimer's Association or the charity of their choice. The family also encourages acts of kindness or visits to the elderly who may be living with loneliness in their own communities.

Joan (pronounced Jo Ann) "Josie" Aron passed peacefully from this world to be with her Lord and Savior Jesus Christ at her residence in the memory care unit of Brightview Baldwin Park in Staunton, VA. Josie was born in Ripley, NY, the youngest... View Obituary & Service Information

The family of Joan "Josie" Cross Aron created this Life Tributes page to make it easy to share your memories.

Send flowers to the Aron family.