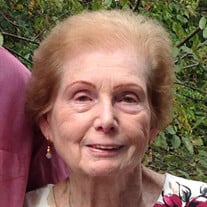 Joanne O'Roark Eimers, age 86, devoted mother and grandmother, passed away in Staunton, VA on November 23, 2021, after a courageous battle with Alzheimer’s. Joanne was surrounded by family and loved ones at the time of her death. Joanne was born July 17, 1935, in Washington D.C. and was the daughter of the late Louella Catherine Dillard O’Roark and William Russell O’Roark. She spent much of her youth in New Market, VA and graduated from New Market High School, where she remained an active alumni in to her 80’s. As a young girl, Joanne traveled all over the United States with her beloved Aunt Lelia Quedens, sparking her interest in travel and adventure. During that time, she also developed a love of dance. She was an avid fan of Dancing with the Stars until her passing. She was a vivacious redhead and as a young girl, entered many dance and beauty contests. She was always outgoing and loved being around people. Joanne was also a fabulous cook, homemaker and volunteer. She served as den mother to both son’s Boy Scout troops. It was through her marriage to Homer O. Eimers, Jr., Buck as everyone called him, that Joanne got very involved with the Lion’s Club. Throughout their marriage, they attended Lion’s conventions all over the U.S. and Hawaii. When Joanne moved back to Staunton, she joined the Staunton Lion’s Club and was an active volunteer and was honored with a Lifetime Achievement Award. Joanne held many jobs throughout her life and in 1995, she joined the staff of Woodrow Wilson Rehabilitation Center. She worked in the Admissions Department for over twenty years, retiring in 2016. She loved her work and the entire D.A.R.s family; but most importantly, Joanne loved talking directly with the students through her work in Admissions. She personified the W.W.R.C. mission in her character and was well liked by everyone she touched. Joanne was proceeded in death by her husband Homer O. Eimers, Jr., brother Buddy O’Roark, sister, Judy Rose, half-brothers Michael O’Roark and Kevin O’Roark and dear friend Sonny Jameson of Weyers Cave. She is survived by her sons, Keith Harter (Pam) of San Antonio, Tx., Charles Eimers (Tiffany) of Staunton, grandchildren Jonathan Harter (Sarah), Joshua Harter (Megan) Alain Eimers, Abbi Eimers, Parker Eimers, and step-daughter Gay Anne Gladdwell and her children Candy and Alex, brother Don O’Roark (Phyllis), (sister-in- law Bonnie O’Roark , great-grandson George Harter and numerous cousins, nieces and nephews. Graveside services will be held for Joanne at the St. Mathews Cemetery in New Market on Monday, June 20th at 1:00pm. Special thanks to the staff at Brookdale in Staunton. Charitable contributions can be made to the Staunton Lions Club.

Joanne O'Roark Eimers, age 86, devoted mother and grandmother, passed away in Staunton, VA on November 23, 2021, after a courageous battle with Alzheimer&#8217;s. Joanne was surrounded by family and loved ones at the time of her death. Joanne... View Obituary & Service Information

The family of Joanne O. Eimers created this Life Tributes page to make it easy to share your memories.

Send flowers to the Eimers family.