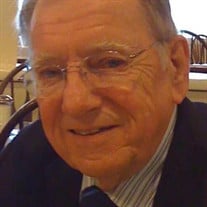 John Francis Karaffa, 88, husband of the late Lucille Carmella (Sposa) Karaffa, of Staunton, died Sunday, December 20, 2020 at Augusta Health. He was born January 6, 1932 in Bayonne, New Jersey, a son of the late John George Karaffa and Lucy V. (Wickersty) Sposa. John was a graduate of Fairleigh Dickenson University with a bachelor’s degree in Accounting. He was Accounting Supervisor for Rocco Turkeys in Dayton, VA and Eastern Regional Controller of Garden State Paper Co. in Garfield, NJ. Additionally, he was Vice President and Controller of Friedman Marks Clothing Co. in Richmond, VA and also Controller and part Owner of Richmond Clothing Company in Richmond, VA. John was also an exempt member of the Norwood Volunteer Ambulance Corps. in Norwood, NJ. He was a devoted member of the Roman Catholic Church. He was an active member of St. Francis of Assisi Catholic Church since 1986 where he served twice on the Parish Council. He was a Lector, Commentator, and a Perpetual Adorer of the Holy Eucharist. He was a member of the first Deaconate program in the Diocese of Richmond, VA and participated in the Charismatic Renewal. John also served as a Parish Leader in the Renew Program at Our Lady of the Lake, Sparta, NJ. He was a member of the Knights of Columbus. John was an avid outdoorsman who enjoyed hunting, fishing, and gardening. He and his wife were foster parents to three children. He was predeceased by his daughters Lucille Christine Karaffa and Anne Therese Karaffa. Surviving family members include his children, John Mark and his wife Rebecca, Thomas Michael and his wife Elizabeth, and Dr. David Matthew and his wife Sandra; grandchildren, Thomas Karaffa (Viktoriia), John Michael Karaffa (Stephanie), Peter Karaffa (Susan), Colleen Murray (Brandon), David Aaron Karaffa (Ashley), Lucille Fatula (Michael), Clair Fahrenholt (Austin), Julie Casey (D.J.), Paul Karaffa (Dana), April Karaffa, Christopher Karaffa, and Rachael Karaffa; and many great grandchildren. A private Mass of Christian Burial will be conducted at St. Francis of Assisi Catholic Church by Father Joseph Wamala. A private burial service will follow in Thornrose Cemetery. Condolences may be sent to the family at www.henryfuneralhome.net .

The family of JOHN FRANCIS KARAFFA created this Life Tributes page to make it easy to share your memories.

Send flowers to the KARAFFA family.