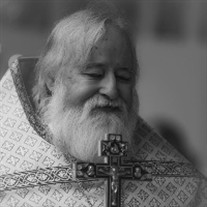 Archpriest John Livick-Moses passed away suddenly on Thursday, July 25th following a long and serious illness. He is survived by his wife, Donna; two children, Elizabeth and John; a son-in-law, Deacon Thomas Opyoke; daughter-in-law, Sarah; and grandchildren, Abigail and Noah. Fr. John and his wife, Alexandra, were born and raised in Virginia’s beautiful Shenandoah Valley, which is surrounded by the Blue Ridge and Alleghany Mountains. He was raised as a United Methodist, and his wife was raised in the Baptist Church. He received his Master of Divinity degree from Duke University and served as a Methodist minister for 20 years across North Carolina and Virginia. The family first encountered the Orthodox Faith while he was on a leave of absence to do a graduate study at the University of Durham, England. By the grace of God and owing to the warm and sacrificial support from the Orthodox clergy he met in the years after his return to the U.S., he and his family converted to the Orthodox Faith. Fr. John was ordained to the diaconate and priesthood in September 1996 by Bishop Hilarion of Manhattan (currently Metropolitan of Eastern America and New York). From 2009 to 2012, he served as a member of the Eastern American Diocesan Council, and during Great Lent 2010 was elevated to the rank of archpriest. They returned to the land of their birth and established All Saint of North America Church in Middlebrook, a small rural village located in the Shenandoah Valley of Virginia, where they served the congregation there for 18 years. Then, with the blessing of His Eminence, Metropolitan Hilarion, the congregation moved to Harrisonburg, and formed under a new name, Holy Myrrhbearers. During his life his mission was service for Christ, and to help people who were struggling. He touched the hearts of people from all over the world, including those in the Philippines, Haiti, Russia, Mexico, and Puerto Rico, building churches and comforting struggling souls wherever he went. He was a music lover and played the keyboard in local bands from his youth to right before his death. He was a jokester, always making people smile and feel at ease. He knew how to touch the saddest of hearts and lift their spirits. But most of all he loved his wife of 44 years, Donna. Together they made the perfect pair and were a wonderful example of a life of service and love. We will miss him dearly. A Funeral service will be conducted at 10 a.m. Tuesday, July 30, 2019 in Holy Myrrhbearers Orthodox Christian Church. Burial will follow in Thornrose Cemetery. In lieu of flowers, donations can be made to Holy Myrrhbearers Orthodox Church, The Building Fund, P.O. Box 2032, Harrisonburg, VA 22801. Henry Funeral Home is handling the arrangements.

The family of John Livick-Moses created this Life Tributes page to make it easy to share your memories.

Send flowers to the Livick-Moses family.