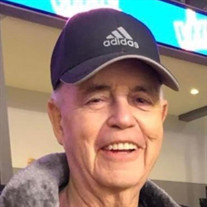 John Paul Rutledge was born on April 22, 1943 in Fort Collins, Colorado to Oather Edward (Doc) and Grace Rutledge. His father was a logger and the family spent time between Colorado and Missouri. Doc passed away when John was 5-years old in Colorado and his family had to ride on the back of a pick-up truck for days with other family members to make it back to Missouri. John recalled how long the trip seemed and how dusty those 1948 back roads were. John spent his younger years with his brothers, sisters and mother in the small Missouri town named Birch Tree. A small town where everyone knew each other or most likely was family. He talked often of the family, cousins and friends that ran and did things outside as kids. When in high school, he played basketball, a sport he would later teach his children and grandchildren, often shouting “use the back board.” Due to his height, in high school he was the center, where his height helped him reach the rebounds a little easier and also a few elbows from other players. After high school, he and a close friend enlisted in the United States Navy and headed off to the Great Lakes for training. He would go on to receive his orders to report to the USS. Lorain County, LST 1177 based out of Norfolk, VA. During his Navy years, he traveled up and down the East coast, the Caribbean and made a few trips through the Panama Canal. During the tense time of the Cuban Missile Crisis, he and his ship mates were aboard the Lorain County near Cuba awaiting instructions; fortunately they would not be needed. Back home in Norfolk, John would travel to a ship buddy’s home outside of Staunton, where John would eventually meet Nickie, his future wife of 51-years. After John left the Navy, he and Nickie married and settled in Staunton, where they raised their children and grandchildren together until Nickie’s death in July 2016. He was employed at DuPont for 36-years during which he worked in several departments and held various positions. He met several great co-workers and had many great stories to tell about their shenanigans. After retirement, he worked briefly for Buckingham Branch Railroad during a few special projects in Waynesboro and Charlottesville. On-coming trains would radio ahead and John would check the train lines to determine if safe for trains to pass. Years at DuPont had instilled a high regard for safety. He truly enjoyed his time on these projects. John also became a Christian in his twenties. He was able to recall and quote most of the Bible. He enjoyed reading the Bible and attending church, most recently Good News Ministries in Staunton. In the 80s, for many years, he participated in prison ministries at both the Craigsville and Staunton and various others. When his son Travis was younger, he coached a few boys basketball teams and later when the grandchildren began playing different sports, he was most likely there, regardless of home or away games. John was also a story teller whether it was a tall tale or a story of his younger years. Most nights when his children were younger, they would pile up on the bunk beds for one of Dad’s bed time stories, most likely about him walking to school in Missouri and single handedly fighting off panthers or some other great fictional tale. In January 1976, the family moved into their home on Paul Street and he remained there until February 2022, when in one night two different fires destroyed his home. John had been home under hospice care and thankfully his daughter Cindy was with him that night and safely led him out of the home. He sat nearby in his daughter’s car and watched as the firemen surrounded the house in an attempt to save his home. After the first fire, he was taken to Cindy’s home and never saw his home of 46-years again. A few hours later, the fire started up again and this is the one that caused the real damage. John moved temporarily to his daughter’s home then temporarily to the Shenandoah Hospice House before his brief stay at Royal Care –Birch Ridge in Staunton. He had hoped to be able to move back home again even though his family knew it most likely would not happen. On the morning of Friday March 4, 2022 around 10:30am, the nurse made a visit, stated his vitals were strong but all felt John had only a few days left. One hour later at 11:32 am as his two daughters held his hands and his grandson Corey stood close, John’s breathing began to slow and very quickly and peacefully he left this world and entered into his permanent heavenly home. No fire can destroy his new home and he never has to move again. He was 78 years old. He leaves behind his children, Vonda, Cindy and Travis as well as his grandchildren Cameron, Corey, Summer, Ashton and Madison. He also leaves his brothers Joe, Randy, Rusty and sisters Patsy, Sharron, Barbara and numerous nieces and nephews. He was loved and will forever be missed. He was preceded in death by his wife, Nickie, his brother Edward, sisters Wilma Lucille, Mary Lou, Rhonda and Betty. Pallbearers will be Monk Davis, John Raines, Marion Hamilton, Jonathan Lam, Dan Ayers and Bo Flint. The family will receive visitors on Thursday March 10, 2022 at 12:00pm at Good News Ministries located at 18 Kerry Lane, Staunton, VA. The funeral service will be held at 1:00PM, burial to follow at Thornrose Cemetery.

John Paul Rutledge was born on April 22, 1943 in Fort Collins, Colorado to Oather Edward (Doc) and Grace Rutledge. His father was a logger and the family spent time between Colorado and Missouri. Doc passed away when John was 5-years old in... View Obituary & Service Information

The family of John P. Rutledge created this Life Tributes page to make it easy to share your memories.

Send flowers to the Rutledge family.