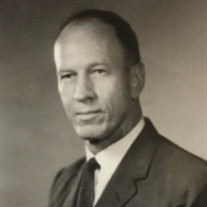 MT SOLON – Dr. John Wesley Todd passed away peacefully at his farm home. He was born May 20, 1921, at Glenmore, the Augusta County family farmhouse built in 1888. He lived until October 10, 2021. Reaching 100 years of age pleased, as well as surprised him. Dr. Todd was a graduate of the College of William and Mary then competed his medical studies at the Medical College of Virginia. After an internship at Cincinnati General Hospital, he was a Fellow in Surgery at the Mayo Clinic in Rochester, Minnesota. He served two years as a Captain of the U.S. Army Medical Corps, 16 months of which were in Korea as a surgeon with a M.A.S.H. (Mobile Army Surgical Hospital) unit. Dr. Todd was a general and thoracic surgeon for 31 years at King’s Daughters Hospital. He could have likely practiced medicine at any other location, but he wanted to serve the Staunton community and surrounding areas. He was preceded in death by his wife, Patricia Coffey Todd. According to Pat, they met in an elevator and had their ups and downs ever since then. Her quick wit continued to keep him in stitches during their 56 years of marriage. Surviving relatives include his four children: Deborah Hedberg (Steve); John W. Todd, IV; Ann Wolfe (special friend Glen Sulanke); and Sarah Nave (Dwight). He is survived by nine grandchildren: Benjamin Abbott (Dana); Taylor Abbott (Malusa); J. T. Todd; Maria Todd; Anthony Todd; Andrew Todd; Esther Wolfe; Charles Wolfe (Paola); and Chelsea Nave (Han-Bee Kim). One great-grandchild is Payton Abbott. Nephews and niece are: Jim Todd, Bill Todd, and Ammie Conner. A memorial service will be held at 1:00 pm on Wednesday, October 13, at Covenant Presbyterian Church, Staunton, VA. Due to COVID-19 restrictions, please R.S.V.P. by calling Covenant at 540-885-2138 or by emailing [email protected] If you call after hours please leave your name and telephone number. Masks are required. The service will also be live-streamed at https://www.facebook.com/pg/Covenant-Presbyterian-Church-163891301309/videos/?ref=page_internal. A family graveside service will be held at a later date. In lieu of flowers, memorial gifts may be made to Covenant Presbyterian Church, the SPCA, Augusta Medical Center, or Augusta Regional Free Clinic. The family extends their sincere gratitude to caretakers Michael Hughes, Maddie Cooper, Taylor Craft, and our sister Debbie Hedberg. Their steadfast service to Dr. Todd kept him at his beloved farmhouse. Very appreciated are the family, neighbors, friends, and Covenant members who helped make his life a long and worthwhile one. Thank you to Dr. John Peterson for his ministerial guidance and friendship.

The family of John Wesley Todd, III created this Life Tributes page to make it easy to share your memories.

Send flowers to the Todd family.