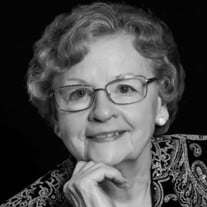 Josephine (Josie) Jane Morani, age 87 passed away on February 16, 2022, in Fishersville, VA. She is survived by her two sons Richard of Fairfax, VA., David (Linda) and grandchildren Michael and Ashley of Fort Defiance, VA., and sister Mary Ann McFall of Kenner, Louisiana as well as many nieces and nephews across the country. Josephine was preceded in death by both parents, husband Renald P. Morani, brothers John Lutostanski Jr., Frank Lutostanski, Joseph Lutostanski, Louis Lutostanski, and sisters Julia Day Dierker and Clara Comerio. Josephine was born in Zeigler, Illinois on April 7, 1934, the last of eight children to parents John and Justina (Lubnicki) Lutostanski who immigrated from Warsaw, Poland. In 1951, at age 17, she was attending a church social dance and was asked to dance by a young man who mistakenly thought that she was a “different” Josephine from a nearby town. The story turned out well as they dated continuously for the next 5 years. Upon graduation from Zeigler High School, Josephine joined her sisters in St. Louis, Missouri, and was employed by Household Finance Corporation. On December 29, 1956, Josephine married her dance partner Renald P. Morani of Herrin, Illinois and they lived in Carbondale, Illinois until Ren graduated from Southern Illinois University. Following her wedding, she relocated to Hazelwood, Missouri until 1969 when the family moved to Vienna, VA. Josephine was a loving and dedicated homemaker and was devoted to her husband and two sons. After her sons left for college, she re-entered the workplace to provide 16 years of care and compassion to elementary and middle school students as a clinic aide in the Fairfax County Public School System. Following her retirement, she moved to Naples, Florida, and loved hosting family and friends while they vacationed in Florida. Josephine was a member of St. John’s the Evangelist Catholic Church in Naples, Florida. Arrangements are being handled in Virginia by the Henry Funeral Home, Staunton, VA. Memorial services will be held later this Spring at St. John’s the Evangelist Catholic Church 625 111th Street Naples, Florida 34108 followed by interment in the Church’s Memorial Garden. Additional details and the specific date will be announced in March. In lieu of flowers, contributions may be made to St. John’s the Evangelist Catholic Church in her name at the address above.

The family of Josephine J. Morani created this Life Tributes page to make it easy to share your memories.

Send flowers to the Morani family.