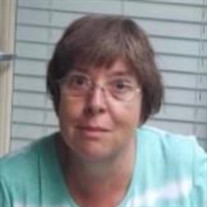 STAUNTON, VA…. Joyce Ann (Griffin) Crummett, widow of W. Homer Crummett, of Cedar Green Road, passed away unexpectedly August 5, 2021, at her mother’s residence. She was born on March 8, 1959, in Staunton, a daughter of Juanita (Helmick) Griffin and the late Farry “Dick” Griffin. Joyce was a member of the Staunton First Church of the Nazarene and the Verona Moose Lodge. She previously worked for Unifi and retired from Food Lion. In addition to her mother, she is survived by a son, Robert Crummett (Jewel) of Harmony, NC; and a daughter, Donna Campbell (Derek) of Goshen; two brothers, Wayne Griffin (Rita) of Deerfield and Charles Griffin (Kim) of Churchville; and two sisters, Mary O’ Neil (J.T.) of Raphine and Annabelle Chandler of Swoope; and numerous nieces, nephews and cousins. In addition to her husband, she is preceded in death by a brother, Buck Griffin of Weyers Cave. A funeral service will be conducted at 1 p.m. Tuesday, August 10, 2021, in the Henry Funeral Home Chapel by Carolyn Lewis. Burial will follow in Oak Lawn Mausoleum and Memory Gardens. Active pallbearers will be David Chandler, Chad Griffin, Wesley Griffin, Derek Rexrode, Weston Rexrode, and Hank Vaught. The family will receive friends from 6 until 8 p.m. on Monday, August 9, 2021, in the funeral home. Condolences may be sent to the family online at www.henryfuneralhome.net.

The family of Joyce A. Crummett created this Life Tributes page to make it easy to share your memories.

Send flowers to the Crummett family.