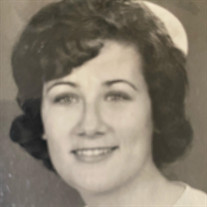 Julia Lou Ruffner Rininger, 77, wife of Larry L. Rininger of West Augusta, passed Saturday, November 7, 2020, at The Legacy at North Augusta, Staunton, Virginia. She was born August 8, 1943, in Harrigut, Tennessee a daughter of the late Vane and Geraldine (Baird) Ruffner. Prior to retirement, she was employed by Sentara in Hampton Roads and Geauga Hospital in Chardon, Ohio. She was a member of St. John’s Lutheran Church in Zanesville, Ohio. She enjoyed reading and cooking. In addition to her husband, family members include a son and daughter-in-law, Christopher and Kimberly Rininger of Aurora, Ohio; a daughter and son-in-law, Stacie and Craig Tyson, Sr. of Hampton, Virginia; two brothers and sisters-in-law, Larry and Yvonne “Butchie” Ruffner, and Ronnie and Joyce Ruffner; and six grandchildren, Marshae, Kole, Tristen, Ashley, Monica, and Junior. She was preceded in death by a daughter, Ann Renee Rininger and a sister, Sue Davis. Memorials may be made to the Alzheimer’s Association, Central and Western VA Chapter, 355 Rio Road West, Suite 102, Charlottesville, VA 22901. The Family extends their heartfelt appreciation to the Staff and Residents of The Legacy at North Augusta for their loving care. Henry Funeral Home is handling the arrangements.

The family of Julia L. Rininger created this Life Tributes page to make it easy to share your memories.

Send flowers to the Rininger family.