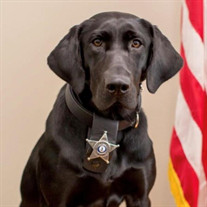 K9 Cara, age 3, passed away on December 21, 2020, while on duty with her partner. Cara Started with the Sheriff’s Office November 2018 after 5 weeks in training at American K-9 Interdiction and West Wind Retrievers and Training (both in the south eastern part of VA). She trained as a single purpose Explosive Detection K9. Cara located a firearm for the City of Staunton in July 2019 and a firearm for the City of Waynesboro in April of 2020. Our team has worked alongside with the Waynesboro Police Department, Augusta County Sheriff’s Office, Skyline Drug Task Force, Staunton Fire Department, Staunton Police Department, Virginia State Police and the Rockbridge County Sheriff’s Office on numerous calls for suspicious bags/packages, bomb threats, locating firearms, ammunition and arson investigations. Prior to her service, she was trained for sport and duck retrieval by John “Scooter” Kello of West Wind Retrievers and Training, which was incorporated into her searching for explosives. She was trained to be fully off leash when she searched, which made her a huge asset, due to it would decrease the time it took to locate items that she was trained to find. She loved people and especially children. During her service she visited the Kindergarten classes at Ware Elementary School in the City of Staunton. She also visited with children at Tinkling Springs Early Learning Center in Fishersville. She also attended numerous events that were held in the City of Staunton and the surrounding area. The last event that she attended was the Fishing Derby in Gypsy Hill Park in October. Cara and her handler, Captain Ryan Insana, walked around the Lake and greeted everyone. While on duty, she would visit everyone in the courthouse and bring joy to everyone’s day. While her handler was in court she would sit behind the judge’s bench and get love and attention from anyone that would give it to her. Her handler, Captain Ryan Insana said the following, “She loved everyone, she would greet everyone with joy and love and it didn’t matter who you were. Adults and children would light up when they saw her. No one wants to be in the courthouse, but she would put them at ease when they saw her and got to pet her. She did more for the community than find weapons and explosives; she brought the community together. It didn’t matter where she or I went, someone knew who she was or knows of someone who had met her and had taken a picture with her. She brought joy into our household and would be our silent protector at home. She was my wife’s dog while at home, she would follow her everywhere and be by her side. Cara was more than just a partner; she was a huge part of our family. She will not only be missed by her family, but she is missed by all.” Cara is survived by her Handler/Dad, Captain Ryan Insana, Mom, Michelle Insana, Two Brothers, Zachary and Noah Insana. She is also survived by her Staunton Sheriff’s Office Family, including, Sheriff Matthew H. Robertson, Chief Deputy Michael King, Deputy Aaron Rohr, Deputy/ K9 Assistant Brady Dodson, Deputy Carter Thompson, Deputy Candy Jones, Deputy Daniel Hall, and Deputy Kevin Wimer. A Celebration of Cara’s Life and her Service to our Community will be held on Saturday January 30, 2021 at 2 p.m. at Thornrose Cemetery, officiated by the Rev. John Craft. The service will be streamed live via the Henry Funeral Home Facebook page and the Staunton City Sheriff’s Office Facebook page. ALL CURRENT COVID-19 RESTRICTIONS WILL BE FOLLOWED. MASKS ARE REQUIRED! Cara was cremated by Paws and Remember and will remain with her family. Henry Funeral Home is handling the service arrangements. Condolences may be sent to the family online at www. Henryfuneralhome.net

K9 Cara, age 3, passed away on December 21, 2020, while on duty with her partner. Cara Started with the Sheriff&#8217;s Office November 2018 after 5 weeks in training at American K-9 Interdiction and West Wind Retrievers and Training (both... View Obituary & Service Information

The family of K9 Deputy Cara created this Life Tributes page to make it easy to share your memories.

Send flowers to the Cara family.