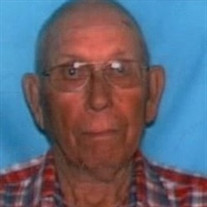 KARL F. METZLER CRIMORA, VA Karl Frederick Metzler, 85, of 35 Samsons Circle, Crimora, died Sunday, May 26, 2013, at Augusta Health, Fishersville. He was born June 30, 1927, in Crimora, the son of the late Henry Clayton Metzler and Carrie (Crickenberger) Metzler Baber. Mr. Metzler served in the U.S. Army during World War II in Troop D 11th Constabulary Squadron. Prior to retirement, he was employed by DuPont with 38 years of service. He was also a farmer for many years. He was a member of the Waynesboro VFW Post 2424. He is survived by a nephew, Lawrence "Larry" Massey II and his wife, Sharyn of Mint Spring; a niece, Avis Marie Winfield and her husband, Mike, of Stuarts Draft; and two great nephews, Andrew and Christopher Winfield; very special friends, Harry and Wanda Boyers and Roger and Sharon Shifflett. He was preceded in death by a brother, Joseph Metzler; and a sister, Frances Massey. A funeral service will be conducted at 11 a.m. Thursday, May 30, 2013, at the Pleasant Hill Church of the Brethren in Crimora by the Revs. Jack Glover and Daniel Wine. Burial will follow in the Church Cemetery. Active pallbearers will be Harry Boyers, Roger Shifflett, William "Southard" Tuttle, Homer Crickenberger, Wyatt Shifflett, and Harry Boyers, Jr. The family will receive friends from 6 until 8 p.m. Wednesday, May 29, 2013, in the Henry Funeral Home. A special thanks to the staff at Augusta Hospice, Megan Clayton, Debbie Brown, and especially, Mark Westebbe, and the staff at Augusta Hospital on 3 East. Memorial contributions should be made to the Augusta Health Hospice of the Shenandoah, P.O. Box 215, Fishersville, VA 22939.

The family of KARL FREDERICK METZLER created this Life Tributes page to make it easy to share your memories.

Send flowers to the METZLER family.