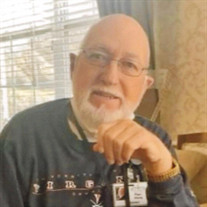 STAUNTON - Luther “Paul” Hiveley, 77, formerly of Verona, husband of Carrie (Swisher) Hiveley, passed away on Monday, June 6, 2022 at Augusta Health. Mr. Hiveley was born on August 29, 1944 in Sugar Grove, WV to the late Tillman and Myrtle Belle (Spreeman) Hiveley. Paul served in the US Navy on the USS Forrestal and was employed at ASR in Verona. He was an active member and an officer in the Staunton Elks and was a member of the Staunton Eagles, Verona Moose, NRA, and the Berryville VFW. He was an avid hunter and enjoyed fishing, bowling, golfing, and was a UVA sports fan. In addition to his wife, he is survived by his daughter, Lisa Hiveley; his step-son, John Jackson, III; his sisters, Mary Grady (Ken), Juanita Bridges (Gary), and Donna Bryan; his aunt, Virginia Propst; and a number of nieces and nephews. In addition to his parents, he is preceded in death by his brother, Alan Loy Hiveley, and his brother-in-law, Jimmy Bryan. A funeral service will be conducted on Monday, June 13, 2022 at 10:00 A.M. in the Henry Funeral Home Chapel. Burial will follow at Augusta Memorial Park. The family will receive friends one hour prior to the service. Casual attire is requested. In lieu of flowers and food, memorial donations may be made to the charity of your choice. The family extends their heartfelt appreciation to the staff of the Legacy at North Augusta for their loving care.

The family of L. Paul Hiveley created this Life Tributes page to make it easy to share your memories.

Send flowers to the Hiveley family.