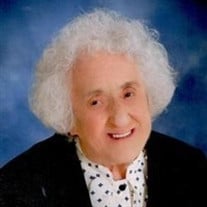 LENA N. MARTIN VERONA, VA Lena Frances (Nazelrod) Martin, 79, of Verona, died Thursday, December 12, 2013, at her residence. She was born June 25, 1934, in Hampshire County in Romney, WV, daughter of the late Samuel Edward and Grace Alice (Kesner) Nazelrod. She was a member of Verona United Methodist Church and the Deaf Club at V.S.D.B. She was preceded in death by her husband, Charles Percy Martin, March 25, 1986; brothers, Vernon, Rudolph, Harry, and Carl Nazelrod; and sisters, Bertha Whalen, Goldie Self, and Ruth Shanholtz. Family members include a brother, Jonah Nazelrod and sister, Mary Lambert of Romney, WV; several nieces and nephews; and a special niece, Pauline "Polly" Starnes of Lynchburg. A funeral service will be conducted at 2 p.m. on Monday, December 16, 2013, in the Henry Funeral Home Chapel by the Rev. Robert J. Weeks. The family will receive friends from 2 until 4 p.m. Sunday, December 15, 2013, in the funeral home and also one hour prior to the service on Monday. Memorials may be made to Verona United Methodist Church, P.O. Box 47, Verona, VA 24482. The family extends their heartfelt appreciation to Dr. Jim LaGrua, Dr. Michael Hanna, Nurse Betty and staff of Carillion Family Clinic for their loving care of Lena.

The family of LENA FRANCES MARTIN created this Life Tributes page to make it easy to share your memories.

Send flowers to the MARTIN family.