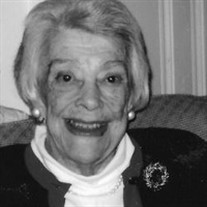 LILE T. BELL RICHMOND, VA Lile Tucker Bell of Westminster Canterbury in Richmond died December 26, 2013, after a brief illness. She was born June 8, 1922, in Alexandria, the daughter of the Rt. Rev. Beverley Dandridge Tucker and Eleanor Lile Tucker. She grew up in Richmond, attending St. Catherine's School. At age 16 she moved to Cleveland with her family, where she graduated from The Laurel School. She attended Sweet Briar College. During World War II she returned to Cleveland where she met Thomas Grasty Bell. They were married on December 24, 1944. After Dr. Bell finished his military service and medical training they returned to his hometown of Staunton where they raised their family. She was a devoted member of Trinity Episcopal Church, where she was one of the first women to serve on the Vestry, and of The Augusta Garden Club. At age 85, she moved to Westminster Canterbury in Richmond. While in Richmond she was a member of St. James's Episcopal Church. She was predeceased by her husband and three sisters. She is survived by three daughters and sons-in-law, Eleanor B. Washburn and William C. Washburn, Jr., Virginia B. Trice and Wilson R. Trice, and Anne B. Turnbull and Robert M. Turnbull, all of Richmond; a son and daughter-in-law, Thomas G. Bell, Jr. and Clair C. Bell, of Staunton; seven grandchildren; nine great grandchildren; and a brother, Beverley D. Tucker, Jr. of Virginia Beach. A memorial service will be conducted at 2 p.m. on Monday, December 30, 2013, in Trinity Episcopal Church. Burial will be private in Thornrose Cemetery. The family requests that no flowers be sent. Memorial gifts may be made to Trinity Episcopal Church, PO Box 208, Staunton, Va. 24402 or to Westminster Canterbury Foundation, 1600 Westbrook Avenue, Richmond, Va. 23227. Henry Funeral Home is handling the arrangements.

The family of LILE TUCKER BELL created this Life Tributes page to make it easy to share your memories.

Send flowers to the BELL family.